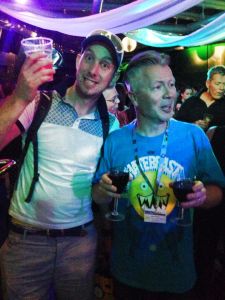 As Angela Salt and Stuart Harrison from FUN CREW say: ‘we aim to MAKE IT HAPPEN on the dancefloor! This year we have an ace new venue, Plug, a short disco-strut from the hub of *everything* you’ll be getting up to at the CMC, so rock up and get down there, one of the top club venues in the north of England.’ 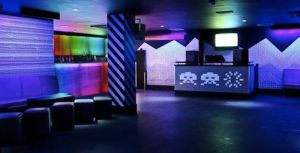 Plug has two late licensed bars with a steady supply of drinks, a spacey disco room for movers and shakers, intimate booths for top secret pitching, an ambient zone (chill-out and chin-wag about the football score/ the searing heatwave/ which exec you’ve just spotted twerking energetically next door) and an outdoor area for fresh air addicts and smokers. 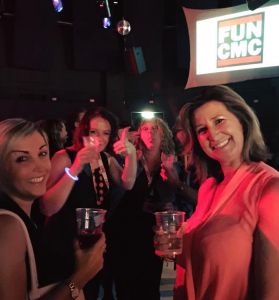 With FUN CREW in da house you’re guaranteed an eclectic mix of floor-filling dance music; classic pop, indie, house, disco, hip-hop, northern soul and rock and roll – everything from Chic to The Clash to Pulp to Prince.

As in previous years, Fun Crew will present a prize of a bottle of spirits to the delegate *owning* the dance-floor. It’s open to all – last year’s clear winner was Chrystel Poncet from Canal+ dancing to The Smiths. This year it would be good to see some newbie B-Boys n’ girls and funky-fresh volunteers in a dance-off.

DJ Andrew Harrison is flying in, live and direct from Dalston to head up the decks. Andrew co-promotes and DJs at London’s ‘grown-up rave’, SPENT, and also writes for The Guardian, The New Statesman and reviews the papers for BBC News. Check him out presenting a brilliant new pop culture talk show, BIGMOUTH, which is available on podcast via Audioboom.com.

FUN CREW hope to enhance the fantastic warm, friendly and sociable atmosphere of the CMC by bringing all those global professionals, independents, students and volunteers together on the dance floor for one, memorable night of inclusive industry partying in Sheffield.

PLUS additional jollities and entertainment to be announced soon!

A word from our sponsor

The sponsor for this year’s official party are Tech North and the Deputy Head of Tech North and Trade and Investment Director, Jennifer Hartley has this to say: ‘the North of England has a long history in creating and producing some of the world’s finest kids content and with the UK’s largest children’s media commissioners in our patch (CBBC, CBeebies and CITV), we’re a natural home for companies and individuals in the industry. The CMC does an incredible job at bringing together professionals from across the world to learn from and collaborate with one another.’

The following day Angela Salt is a speaker in the Co-Development: When Two Become One session at 2.10pm on Thursday 7th July.

Brought to you by Berocca and YSL Touché Eclat 😉