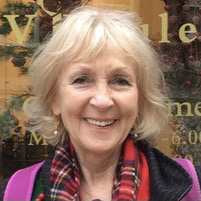 Vicky trained at The Central School of Speech and Drama then joined the newly established Theatre-in-Education Company at the Belgrade Theatre, Coventry, as an actor/teacher. She was the presenter for twelve years of BBC Children’s TV, ‘Words and Pictures’. Television writing includes adaptations of Allan Ahlberg’s, ‘Happy Families’, books for BBC TV, which received a Writer’s Guild GB nomination.

As Artistic Director of Polka Theatre, London she directed, produced and commissioned new theatre writing for children. Vicky was awarded an MBE in 2002 for services to children’s drama, the first of its kind and was elected a Fellow of The Royal Society for the Arts in 2008. She is currently an Honorary Member of ASSITEJ, the world organisation of Theatre for Young Audiences, Secretary of the International Inclusive Arts Network, an Associate Director of A Thousand Cranes Theatre and Chair of the charity, Action for Children’s Arts.

Exploring playmaking with and playwriting for young people, and highlights the different approaches to writing for stage and for screen.

Exploring playmaking with and playwriting for young people, and highlights the different approaches to writing for stage and for screen.