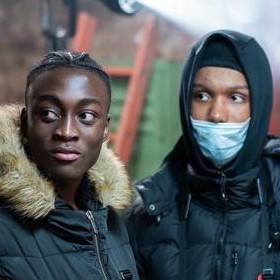 Selorm is an 18 year old actor, director and producer. He has worked on a variety of projects and collaborations such as ‘London’s Curse’ where he is both lead actor and producer with his own production company XVI FILMS; music videos such as “FBI” on GRMDAILY; commissioned projects with clients such as Dr Angela Herbert MBE. Selorm has worked closely with the Hackney Historic Buildings Trust and the Hope and Her Two Daughters production to create visual projects and raise money for charities across Hackney. His ambition is to become one of the most influential black creatives in the film industry, both on and off-screen, in order to inspire the next generation of under-represented film makers.

Marcus is an 18 year old East London based director and script writer.  In the past two years, Marcus has directed and acted in ‘London’s Curse’, a short film on knife crime prevention and directed ‘County Lines’, a pilot for an upcoming series. Marcus worked with his local community to help film ‘London’s Curse’, with The Yard Theatre (Hackney Wick) and companies like The Advantage Group being a great support. Marcus is exploring his creative identity and takes inspiration from Spike Lee and Yoni Lappen.  His goal is to make films for the unrepresented and to tell stories that aren’t usually seen on TV.

Marcus and Selorm recently set up their own production company – XVI Films – and are currently working with Croydon charity, Two Local Lads, to produce a short film on mental health titled, ‘Mind Yourself’.

The latest information from the Head of the Young Audiences Content Fund, followed by commissioning priorities from Channel 4, CITV, Milkshake! on Channel 5 and S4C in a live Q&A.

Selorm Adonu and Marcus Austin are 18 year old film makers from London with their own production company and an ambition to become influential black creatives and tell stories for the under-represented.