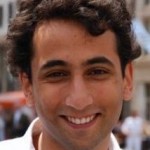 Sanjay recently obtained a Master’s Degree from the University of Westminster with a dissertation on Change Management and Transformation at BBC Children’s. Prior to resuming his studies, Sanjay worked in communications and strategy planning for various European companies. In 2008, he was part of the press team at Airbus in Germany for the launch of the company’s flagship aircraft the A380. He later moved to Bangalore India, joining a strategy and investment firm developing its business arm.

Sanjay returned to Europe on a new mission at the engineering giant Alstom, assisting its Director of Internal Communications on a number of projects including the deployment of a new E-Learning module and communication plan following an acquisitionSanjay.

He is currently Community Networks Manager for the public broadcasting watchdog The Voice of the Listener & Viewer and a member of the Ben & Jerry’s Ice Cream Millennial Advisory Board. Sanjay gained a BA (Hon) from London Guildhall University and the Université Paris VIII in Film and Broadcast Production. In his spare time he enjoys travelling and watching films and has a fascination for the world of transport and Children’s Television.

Shape It, Pitch It!

Blogged by Sanjay d'Humieres Shape It, Pitch It! That was the name of one of the workshops dedicated to pitching attended by some 50 delegates all eager to improve their skills on this difficult and sometime daunting art form. Workshop producers Dinah Lammiman and Jason DaPonte led this afternoon session…