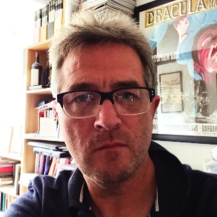 Robert is an award-winning producer, writer and director with thirty years’ experience in the film, television and animation industry. In 2009, Robert set up Space Age Films to create quality fare for film and television in animation and live-action. Robert set up and is co-owner of the multi-award-winning animated series ‘The Deep’ based on the Australian graphic novel. He has helped guide the show with his partners at Technicolor to become a global hit series, shown in over 220 territories around the world, with broadcasters including the BBC, Netflix, ABC and Super-RTL. To date, there have been three seasons, a total of 52 half-hours, book publishing through Bloomsbury, 4D theatre experiences, aquarium events, platform games, and a global toy range. Robert is currently setting up the live-action feature film version of ‘The Deep’ as a Summer tentpole picture. Robert is the feature film consultant for Blue Zoo Studios, working with them on their film slate, including ‘Monkey’ and ‘Two Caravans’, of which he is also a screenwriter. Robert is a consultant to Lupus Films, working on two live-action features, including ‘Lionel The First’ with Oliver Parker as director, and ‘A Christmas Number One’, of which he is also a screenwriter. Robert is Executive Producer of Red Star Studios’ ‘Stardog & Turbocat’ animated movie, starring Gemma Arterton and Bill Nighy, currently in production for 2019 release. Robert’s animated feature, ‘The Canterville Ghost’ with Stephen Fry and Hugh Laurie, is in active development for a Winter 2020 release.

A fully-funded independent British animated movie for families - how did they do that? The story of ’Stardog and Turbocat’, it’s creation, development and production plan.