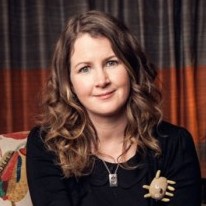 Niamh Sharkey is an award-winning author and illustrator of children’s picture books. Her books have won numerous awards including the prestigious Mother Goose Award. Her current titles with Walker Books include ‘The Ravenous Beast’, ‘Santasaurus’ and ‘On the Road with Mavis and Marge’. Niamh’s books have been translated into over twenty languages.

Niamh is the creator and executive producer of Disney Junior’s animated preschool series ‘Henry Hugglemonster’ and the author of ‘I’m a Happy Hugglewug’ the children’s picture book published by Walker Books, on which the television series was based.

Niamh is the former Laureate na nÓg, (2012-2014) an honour that was established to engage young people with high quality literature and to underline the importance of children’s literature in our cultural and imaginative life.

For more about Niamh’s past, present and future, visit www.niamhsharkey.com or @sharkeytweets