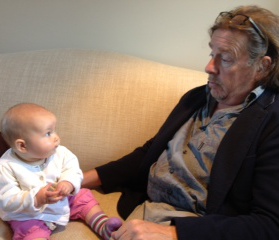 Ideas at Work is the brainchild of Henry Becket, who after a 30+ year apprenticeship in advertising as copywriter, creative director, chief exec and latterly commercials director, escaped to the comparatively grown-up world of children’s TV programmes. At one point Europe’s busiest producer of children’s ads (and with 4 children and 2.9 grandchildren), he was conceited enough to think he knew a lot about “what kids want”…so came up with five TV ideas.

The first – a 3D HD animated series for pre-schoolers, “Olly the Little White Van” – now runs to 65 episodes and is gradually rolling out round the world.  It is aired on Channel 5, Cartoonito and Boomerang and in cinemas in the UK.

The next – a 2D animated family comedy for older children, “Sunnygreen Farm” – has been a year or so in development, and with the bible complete is getting increasingly serious interest from investors, broadcasters and potential production partners.

Ideas at Work is unique in many ways, not least in having no fulltime staff, but working with a loose-knit team of blue-chip industry creatives, consultants and advisors, all of whom, happily, know a lot.  The plan now is to bring at least one more stunning concept to the world, before senility finally sets in – or second childhood, which clearly would be much more useful…