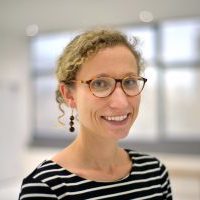 Christine Singer is a Post-doctoral Research Associate in the Department of Culture, Media and Creative Industries, King’s College London, where she is working on the AHRC-funded project ‘Children’s Screen Content in an Era of Forced Migration: Facilitating Arab-European Dialogue’. She holds a PhD in Media Studies from SOAS, University of London, with her doctoral thesis exploring notions of childhood and coming of age in relation to film, television, and digital screen media in post-apartheid South Africa.