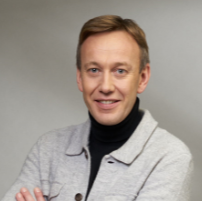 Chris Rogers is a multi-award-winning and Emmy-nominated presenter and investigative journalist. He started as the youngest ever presenter of BBC Newsround at just 19 years old.

In 2016 Chris co -founded the indie Fresh Start Media with First News Editor Nicky Cox MBE and producer Marshall Corwin. In 2018, they were commissioned by Sky Kids and Sky News to produce a weekly children’s news programme to be presented by children, ‘FYI’ (For Your Info) has recently been nominated for a Broadcast Award.

The abundance of online fakery and fake news is making it increasingly difficult for young audiences to know what's real and what's not. What responsibility do we have? How can we equip them with the skills to navigate the truth?