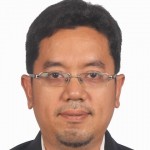 Azrul Baharom is the founder of Funcel Sdn. Bhd., having established the company in 1999 as an animation production house specialising in 2D animations.

Under his leadership, Funcel has successfully marketed its animation productions to various parties, including Radio Televisyen Malaysia (RTM) †, the national television broadcaster and Gonzo, a renowned Japan-based producer, and August Media Holdings, a Singaporean based international content producer.

Driven with a high passion in animation, Azrul sets the goal for Funcel to be one of the world’s leading Intellectual Property developer power-houses in the near future.

Azrul has also positioned Funcel to be among the representatives under the EPU’s (Economic Planning Unit under Prime Minister’s Department) industry panel to provide insights & advisory to the EPU to strategise on the promotion and direction of the local creative content industry.

In his personal capacity, Azrul is an exco member of Persatuan Penerbit Televisyen Malaysian (PTVM), and a member of CCIG (Creative Content Industry Guild) and the New Economic Forum (NEF). Azrul also sits on the panel of the MDeC Pre-seed Fund Programme for the Creative Content sector.

Funcel is bold with the plan of expanding it’s international marketing campaign with full force as Funcel always believe ‘impossible is merely nothing!’.

Funcel was incorporated in April 2002 as an Animation production entity, which has now diversified into Intellectual Property creation and global animation production and distribution. Funcel has created opportunities for highly skilled and experienced people who are now diligently putting their expertise and creativity into action. With continuous development, Funcel has been positioned to undertake larger and more challenging projects, including expansion abroad,

with exposure to the global market through quality produced products and also co- production partners from Japan, Singapore, Germany, Spain, Malaysia and more to come.

The lowdown on working with Malaysia including members of the International Exchange delegation.