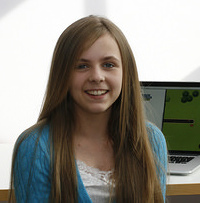 16 year old Amy Mather @MiniGirlGeek has been making and coding for three years with the guidance and support of the community that she found in Manchester. Amy was the closing keynote speaker at the world’s first Raspberry Jamboree event in February 2013, speaking alongside Professor Steve Furber and Pete Lomas of the Raspberry Pi foundation. Since then she has addressed a number of conferences including CampusPartyEU at the O2 Arena with Jimmy Wales, WE day at the Wembley Arena with AOL & Codecademy and The ODI Summit with Baroness Martha Lane Fox and Sir Tim Berners Lee, whilst continuing to enjoy creating an array of python projects and teaching e-textile workshops.

The Web We Want

What Web do we want for the next generation?  Find out what your responsibilities are – as producers, platform/content providers and brand owners. Test your knowledge as our experts navigate the complicated world of online rights for kids. And contribute your ideas to help establish a better web where the children of tomorrow…