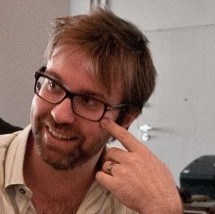 Alex Fleetwood is a game designer, creative director and entrepreneur.

He founded the award-winning Hide&Seek in 2006, building a studio with a unique reputation across a range of sectors, working with partners including: Nike, Warner Bros, Tate Modern, Royal Opera House, Film4 and PlayStation. Just before its closure, Hide&Seek was named as one of the Top Ten Game Studios of 2013 by industry bible Gamasutra.

Alex is currently working on his next venture, an independent hardware games company at Somerset House. With support from the Play Sandbox R&D scheme, it shipped its first prototype, Fabulous Beasts (playfabulousbeasts.com) in March 2015. The game has been showcased at games events to widespread acclaim from press, players and industry partners alike.

With the futuristic vision of connected toys and wearable technology now becoming a reality, what does that mean for tomorrow's media producers? In this workshop we explore how 3D printing could change how we model kids' characters in the future and distribute toys as kits of parts; how games are…