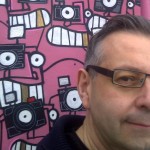 Alan Gilbey is a screenwriter, show developer and script consultant who has developed original animated content for major studios on both sides of the Channel and Atlantic, as well as show running several series of his own. Shows he scripted have won many awards, including a Pulcinella, an Annie and two BAFTAs.

His most recent projects include an innovative new pre-school series about philosophy and his own creation ‘Dinopaws’, both of which will be appearing on CBeebies in the near future, as long as the Mayans have got it wrong.

An active session to help you create stronger shows and structure better scripts.