Home » News » One Minute to Save the World

One Minute to Save the World 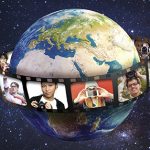 Voting is already open for CMC’s young people’s film competition in association with PQATV. The shortlist of 15 films can be viewed at CMC, or on this voting website.  All the films were written, directed, shot and performed by young people under 18. The winner will take away £2,000 of camera equipment, and all the film-makers will be invited to a premiere screening at a London cinema later in the summer.
Vote here in advance of or during CMC.