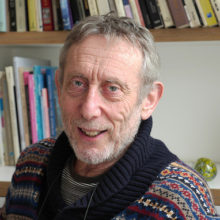 After decades working in the world of public service broadcasting, children’s theatre and educational publishing, Michael Rosen has now become a YouTube phenomenon, with over 220,000 subscribers and 40 million-plus views of his content.

As someone who interacts with children on a regular basis, Michael Rosen opens the conference on Tuesday 3 July championing creativity and imagination in the face of what he calls “data-driven education”.

But he’s no digital Luddite. Enthusiastically embracing the liberation of YouTube over ten years ago, his channel has given him access to his audience in ways he could never have imagined as a young BBC trainee working on ‘Play School’ in the 1970s.

But the relationship with social media has its downside too. Outlining his focus for the address, Michael says:

“I’m riding the crest of the digital wave, I thought. Only to discover that what I was riding was a tiger: a tiger with an insatiable appetite and an audience only too eager to be eaten. We want tigers to roam free. Of course we do. But that doesn’t mean we’d give our children to one. So what do we do?”