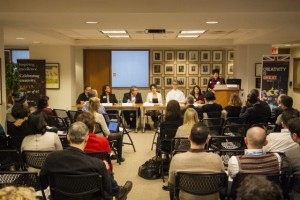 On Monday 10th February CMC held a breakfast briefing for all the UK@Kidscreen delegates.

BAFTA NY once again worked with us to bring the delegates an in depth look at kids’ viewing trends from a North American perspective.

The event was hosted by Linda Kahn and included discussion on second screen viewing and new platforms as well as how traditional television outlets are adapting to growing alternative screens.  We explored new funding models that are emerging in response to the development of these new digital outlets, as well as the more conventional needs of traditional networks.

The panel took place on Monday, February 10th, at the British Consulate.