Megan Perryman and Tessa Trabue from Let Toys Be Toys explain why they have made a video for the CMC 2020 Inclusivity Now strand.

The Children’s Media Conference Facebook Group Chat – Inclusivity Now offers the opportunity for delegates to comment, ask questions and discuss the content of all the Inclusivity Now strand at CMC.

Back in 2012, heated discussions were taking place on a popular UK parenting message board about the ‘girls’ and ‘boys’ signs spotted in the toy aisles of many UK retailers.  Cooking and cleaning toys along with dolls were signposted for girls, while construction, science and action and adventure toys sat firmly on the ‘boys’ side of the aisle.  Parents were concerned about children having their interests limited and being boxed in by these gender stereotypes. One night, in the midst of one of these discussions, the parents decided to do something about it, and the Let Toys Be Toys campaign was born.

Although we were pleased to have such good success in our first year with our original ask for retailers to take down the signs down and ‘let toys be toys’, we found that even after the signs and labels were gone, there was often still a stark divide in the way toys were marketed. Our further work with toy manufacturers, publishers and educators showed us, simply, that children are still bombarded with gendered messages about the ‘right way’ to be a boy or a girl pretty much from birth. 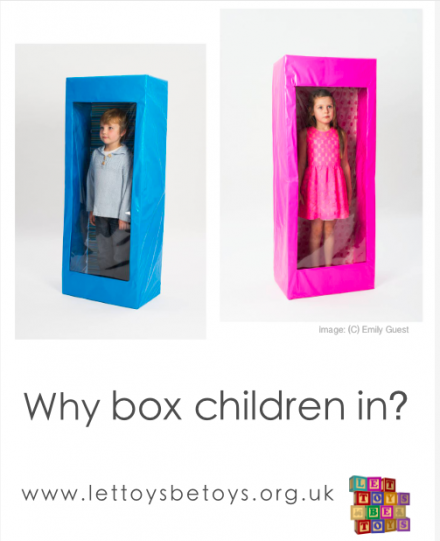 This extends to children’s books and media.  Research by the Guardian in 2018 found that male characters dominate the most popular children’s picture books, with females outnumbering males characters in less than a fifth of the books. Hopster’s 2019 report into preschool programming found that gender stereotypes are still prevalent in over a third of the shows viewed, with males being shown as knowledge-bearers and protectors, versus female characters being objectified and sometimes even undermined by male characters. They also found that male characters often outnumber the female characters too. As is often raised with us at Let Toys Be Toys, other gender s
tereotypes were prevalent, such as female characters being defined by the colour pink, and either featuring in the background or missing altogether from promotional merchandise too.  We ran our own research into advertising to children both on and off screen, and found that a very stark divide remains in the way toys are marketed, giving children very clear messages about what they should, or should not, be playing with.

These gendered narratives may start in childhood but can have significant, long-lasting and potentially harmful impacts for all children. At Let Toy Be Toys we want all children to have the freedom and confidence to follow their interests, develop new skills and to know that they can be whoever they want to be. We have compiled a list of tips for children’s media (#Just4Asks) to help challenge these persisting gender stereotypes to make a positive difference for children today, and well into the future. We would love it if you could join us on that journey.

Join Natalie Petrou from Hopster and Tessa Trabue from Let Toys Be Toys between 12.30 and 1.30pm on Tuesday 7 July in the CMC Facebook Group, to chat about the effects of stereotypes on young children, and what you can do about it.  Post your questions beforehand or come in live at 12.30pm BST (between CMC Question Time and PSBs Commissioner Conversation) 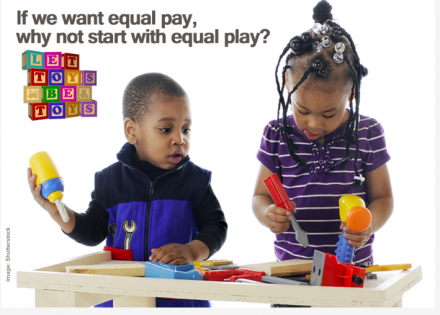 Let Toys Be Toys is an award-winning social media campaign challenging gender stereotypes in childhood, especially in toy marketing, publishing, education and the media. The campaign has successfully convinced 15 major toy retailers and 11 children’s book publishers to drop the gendered labels, and let children have the freedom to… Read more