Following up on the UK Screen Alliance inclusion and diversity survey, the session considered how access to the animation industry can be improved and why that‘s better for business.

Kate gave a whistle top tour through the Key findings of the Screen. Alliance Report on Diversity and Inclusion, which offered separated figures for the animation sector.

Greg Childs moderating called on the speakers to react to those highlights from the report with comments appropriate to their experience.

BFI Diversity Standards underpin the requirements for YACF Funding. 9It;s not about”bo-tcking”, but it is possible to qualify on the diversity criteriaa in a number of different ways, as like everything else in applying for the Fund, it’s a points based system with a number of different approaches to diversity allowing for points. The key to a successful application is to offer great rich and diverse content. It’s best to speak to the team about how to meet the requirements – along with everything else associated with the Fund..

Brown Bag in Manchester is run by women. The team has a strong mix of gender and 28 nationalities across 102 staff. Lander and her team offer training in unconscious bias which can be very effective.  She revealed a statistic – 99.999996% of the decisions we make every day are made unconsciously.  Its important to raise awareness of what the affects of some of those might be, to consider whether praise and favour within organisations is being directed at the most deserving or at people “most like ourselves”.

Greg Boardman : PowerPoint
Greg talked about his expeerinces in building diverse teams to create inclusive content for ‘Rastamouse’ and ‘Apple Tree House’ for CBeebies. He felt that we shouldn’t be having this conversation any more. It should be sorted by now, but it isn’t.   He talked about greater “depth” to the approach to diversity.  Companies need diversity at board level if they are to truly reflect what diversity is.  So important to get the support of broadcasters for producers to push diversity.  Greg Childs brought up the principle of “you can’t be it if you can’t see it”. Greg Boardman felt that if there isn’t a parent pushing children to go into a creative industries role, they are less likely to do it.

Top takeaway: The industry needs to go into schools and talk about what we do and why it’s great. Start from the ground up. It’s the only way to change it.

Divya Sachdeva talked about her own personal experience of working in the media industry and revealed that her extended family questioned why she wanted to a job in TV, as they didn’t view it as a long term career option. But she wanted to do something different with her career and tell stories. She let that diversity also meant telling the stories of other cultures, or from their cultural perspective.  Greg revealed he had been nervous about asking people of colour to take pat in the panel , for fear of tokenism.  He asked if she had thought “why me” when asked.  She said that she had long and are before participating. She was both unsure and curious about taking part but decided in the end that if people like herself are to make a difference then it is important to be seen and heard, and to encourage others. She wanted to use the power of her voice.

Top takeaway: I don’t see enough people from BAME coming into the industry. We need to go and find talent and encourage talent.

Emma Fernando moved her family to Manchester to work on ‘Nella the Princess Knight’. She was delighted that the character was mixed race. This comes about from the originator of the series being a person of colour and she felt able to take that on further. She spoke about decision making around the design of the character of Nella’s father who started life as also undefined, mixed race, but after research it was decided to ensure he looked black, with Afro hair for example. Nickelodeon were very supportive through this process.  The satisfaction comes from seeing  the big impact it has when children discover and love characters that look like them.  She wanted to mirror the strength of the show within the crew and to makes sure the voices behind Nella reflected all the characters.but this isn’t easy.  You always want the best talent you can get, and it’s often simpler to take the line of least resistance and always go for the people who are known. That doesn’t move things on.

Top takeaway: More people need to go into schools. Register with ‘Inspiring the Future’ for opportunities to speak to schoolchildren and students about jobs within animation. Everyone should be thinking about feeding the machine from the bottom. 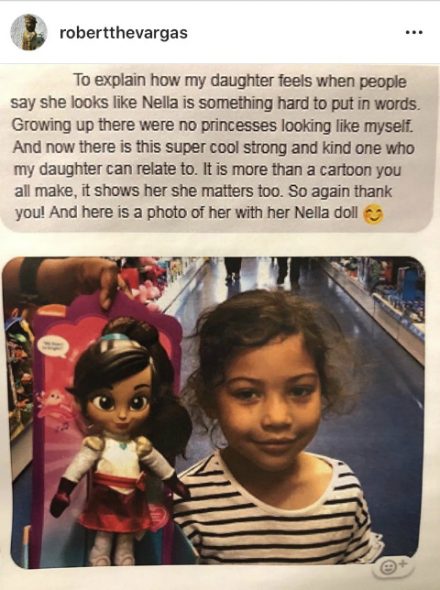