The conversation began with a question about what Brexit will mean for programme distribution sales to the European Union, with Genevieve Dexter suggesting it should be “business as usual” – albeit with some work to do to understand the various bilateral agreements in terms of withholding tax.

“In Australia you have 5% withheld, in France you have 33% withheld but if you fill in the right forms it’s 0%, and in Germany it’s 15.872% but you can claim it all back. So every country has a different way of dealing with it,” she said. Other potential areas of complications are, thankfully, simpler: TV doesn’t really have import and export levies for example. “You’re not selling something, you are giving somebody a licence to distribute, to transmit your programme for three years. You’re not exporting something that’s then going to be re-sold. And now of course, the transfer is all digital,” she said.

Other areas, for example the VAT implications post-Brexit, remain unknowns. “The area where we do see a threat is in human resources,” said Dexter, citing the example of her director of sales, who has lived in the UK since she was 17, but nevertheless had to complete an 80-page document to secure her right to remain. “It was very complex and very stressful,” she said. The topic would be returned to in greater depth in the final session of the event.

Michael Stretton agreed that the question of withholding tax will be the main issue around income. “If there’s a deal, no one expects any kind of change at all,” he said. “If there isn’t, then there are other regs that will apply, but the process is the same… provided you make a profit, you can offset, and it’s an admin thing, a bureaucratic thing – as long as you get the tax certificates at the time you’re paid.”

Liz Brion showed some useful slides  on the withholding-tax impacts of the UK not being an EU member. Even in a no-deal scenario: “It’s not all bad news,” she said. “What that broadly means is if you’re receiving income from a particular territory, rather than having a beneficial rate of zero under the [EU Interest & Royalties] Directive as it currently stands, that country will look at its domestic withholding tax-rate and say ‘well what should we be deducting from you, as a payee in the UK?'”

The crucial factors will be ‘double-taxation agreements’ between the UK and individual countries. “At the moment you might be bearing zero rate on income coming from EU territories, but in the future, there might be a rate applicable, because our treaty doesn’t reduce it to zero.” But her slides made it clear that a number of those territories will continue to have a zero rate. Also, when there is a rate, where a producer is working with a distributor: “This is unlikely to apply… because where a distributor is actually marketing for you, they have the rights, and they’re the ones that will be suffering this rate, not you directly.” 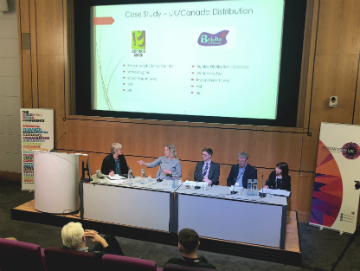 Another major topic for discussion was the European Union’s General Data Protection Regulation (GDPR) legislation, which became enforceable across the EU and European Economic Area (EEA) in 2018. It covers rights of individuals and obligations to companies that handle data, as Éamon Chawke explained.

“One of those is that if you move data from the EEA to a country outside the EEA, then there are additional conditions, restrictions, safeguards that have to be put in place,” he said. Here, too, there are different scenarios depending on whether the UK exits the EU with a deal or without one.

In a deal scenario “it’s actually not that complicated” – a withdrawal agreement plus a transition period until at least the end of December 2020 will mean no additional restrictions or conditions for British companies. Chawke explained that during this period, the European Commission will begin a process of “assessing the UK’s data-protection infrastructure with a view to granting an adequacy decision” reflecting its confidence that data can be transferred from the EEA to the UK without the need for any additional restrictions. “The ambition is that adequacy decision will be done and dusted [by the end of the transition period],” said Chawke.

If the UK leaves without a deal, however, the situation will be less rosy. The day after a no-deal exit, GDPR will cease to apply to British companies (or ‘controllers’ of data), but a near-carbon copy called GDPR UK will be introduced in its place.

“The big issue is with data transfers,” said Chawke. A no-deal exit means no withdrawal agreement, and thus no transition period during which to secure that adequacy decision – meaning additional restrictions will apply. “In the longer term, even if we leave without a deal, we’re likely still going to get that adequacy decision. It’s about what happens in the year or two in between,” he said.

This is relevant, even for producers and animation companies who do not think of themselves as holding data (as Dexter pointed out) in the same way that broadcasters or online-video services would. Chawke pointed out that data on international partners – from names, email addresses, and phone numbers through to the data contained within supply and employment agreements – will have been collected from people outside the UK. “Personal data is any data that identifies a living individual,” he said.

Chawke offered some Brexit-specific actions that companies can take now: update their record of processing activities; update their privacy notices; update their data protection impact assessments (DPIAs); update their contracts with third parties; and ensure they are in compliance with the current GDPR rules. “If we do leave, particularly without a deal, the regulators in the UK and in Europe are going to appreciate the context in which this is happening. As long as you’re complying with the existing laws, you’ll be in a better position than if you’re not complying with laws that are two years old,” he said, before summarising pithily: “Keep calm and check your data!”

The session also explored the issue of copyright (which protects creative works), patents (which protects inventions), trademarks (which protects brands) and designs (which protects designs). Protecting copyrights and patents is the least problematic process from a Brexit perspective: if you have a copyright or a patent in the UK you can enforce it in another country: “Achieved by international treaties which have nothing to do with the EU,” as Éamon Chawke explained. “Whether we leave with a deal or without a deal, that will not change.”

He did warn that there is potential, in a post-Brexit future, for the UK and EU approaches to the various protections to diverge. As for trademarks and designs, currently an EU trademark is enforceable across the Union, and with a deal that will continue to be the case. In a no-deal scenario, existing trademarks will only be enforceable in the UK, and companies will need to apply for new, UK-only trademarks in addition. “Independent UK registrations are even more important now,” he said. “Do not allow existing UK registrations to lapse.”