Brexit and the future of funding for TV, film and games

The first session at the ‘Be Ready for Brexit’ event focused on the future of funding, with Robert Specterman-Green, director for media and creative industries at the Department for Digital, Culture, Media and Sport (DCMS) joined by Jack Powell, senior policy analyst at BFI.

“I am a civil servant and not a politician… my basic plea is don’t shoot the messenger and be nice to me!” joked Specterman-Green, before explaining the situation as things stood (and still stand) with a deal agreed between the British government and the European Council, but not yet ratified by the UK’s parliament or the European parliament.

“All scenarios remain on the table, including a negotiated settlement – a deal – with the implementation period that comes with that. But also a no-deal scenario, if the parliaments fail to ratify that [deal],” he said. “We do need to talk about both kinds of outcomes. What happens in relation to funding – and principally I guess we’re here to talk about the Creative Europe fund – in a deal scenario, and in a no-deal scenario.”

If a deal is ratified before the end of January, it will include an implementation period due to end on 31 December 2020, although the UK and EU could jointly agree to extend that for up to two more years.

In this scenario “nothing changes” in that UK projects would remain eligible for all EU funding programs, including Creative Europe Media, and British companies could continue bidding to that fund until the end of the implementation period. Specterman-Green explained that what happens after that point depends on the nature of the future-relationship agreement struck between the UK and the EU.

“The political declaration, which was agreed alongside the withdrawal deal, did make provision – very high-level terms – for continued participation by the United Kingdom in EU funding programs,” he said. The declaration did not go into the specifics of how that will work, but it at least holds out the prospect of continued UK access to Creative Europe Media and other EU funding schemes. However, Specterman-Green warned that this cannot yet be guaranteed, even if Prime Minister Boris Johnson gets his withdrawal agreement ratified.

“There remains a scenario whereby we agree the withdrawal agreement now, including an implementation period until the end of December 2020, but the parties fail to agree the terms of their [future] relationship, and so we are back into what we might colloquially describe as a no-deal scenario,” he said. “Namely, that there would be no automatic continuation of the United Kingdom’s participation in EU funding programs. And, indeed, logic would suggest that if everything has fallen down, then the in-principle statements of the political declaration would also not apply, and so we would no longer be eligible to participate in Creative Europe Media.”

This, however, is not to say the UK could not participate, even in a no-deal scenario. Jack Powell pointed out that the next phase of Creative Europe Media, which will run from 2021 to 2027, “has been designed specifically to allow third-country participation. That means even if you’re not in the European Union, you can make a financial contribution and take part in it”.

As things stand now, Powell stressed the “business as usual scenario” – British companies could and should continue to apply to Creative Europe funds and training schemes, right up to 31 January under the current extension, with the Creative Europe Desk UK ready to help with that process.

“It’s worth noting there are about six additional Media calls for funding until then,” he said. “The advice of the Creative Europe Desk, and the UK government as well, is to continue to apply for those funds: because if there is an opportunity for you to grab that investment while we are eligible, we absolutely encourage you to do it.”

Should companies worry about what happens to their funding if the UK exits the EU without a deal after their application has been approved, but before their project is completed and they have received all the funds? Both Powell and Specterman-Green offered reassuring words. In Powell’s case that was for a deal scenario.

“If you’ve agreed a funding relationship with the Creative Europe program by 2020, even if your payments are due to continue after 2020 after the end of that program, they will continue: you will get your money until the final payment,” he said.

Specterman-Green talked about a no-deal scenario, and the UK government’s guarantee for EU-funded programs in that case. “If you’re already in the system – if you’ve been deemed eligible for funding under the program – then the guarantee will cover you,” he said, while noting that it will only cover direct UK beneficiaries of funding, rather than (for example) EU distributors. DCMS is keen for anyone applying for funding to make sure they notify it and/or the Creative Europe Desk UK, so they have as accurate a picture of who’d require the guarantee in the event of no-deal. 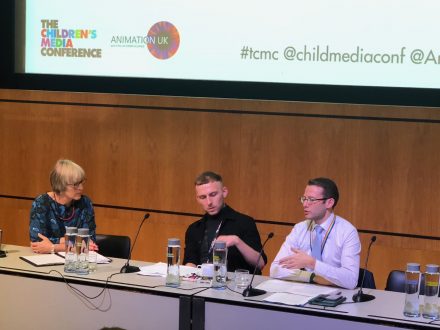 With a deal meaning business as usual through to the end of 2020 at least, the conversation understandably focused on no-deal planning. There is another way the UK could participate in Creative Europe throughout 2020 even if it has exited without a deal, but that would depend on the government accepting an offer from the European Commission (which has been made) to contribute to its 2020 budget, and thus continue to access programs like Creative Europe. Specterman-Green declined to speculate on the government’s likely decision, however.

The big question in a no-deal scenario, for the longer term, is what programme(s) might replace Creative Europe for British companies in our sector. What would a domestic alternative look like, and how might it work? The DCMS is just as keen to ask those questions, even if it can’t answer them just yet. Specterman-Green stressed that the department is in full listening mode.”I am interested in all of your ideas…. If we were to have a domestic alternative in place, what that could look like,” he said. “The Creative Europe Media fund is quite a complex beast. It’s got a number of funding strands, a number of inter-dependencies, so it’s unlikely we’ll be able to replicate all facets and features of that scheme on a purely domestic level. So I would find it useful to know: what are the particular aspects of the way that the program currently works that you would especially like to see continue? So we can feed that back into the thinking that we’re doing at official level.”

Specterman-Green was keen to make one thing clear: the British government’s Contestable Fund, which has been in the works since 2016 and is now known as the Young Audiences Content Fund, is not seen as the potential domestic replacement for Creative Europe Media. “These are two distinct instruments with different objectives, and I wouldn’t want you to think that the way we’re thinking is that the Contestable Fund is already the situation to this [no-deal] situation,” he said. “This fund was designed to target a very specific objective, which is to provide more new, innovative British content to young audiences. That is very different from what the Creative Europe Media fund aims to do. One is not a replacement for the other.”

Jack Powell noted that when discussing any potential replacement for Creative Europe, it’s important to think about more than just the cash: what the industry would be losing would also be access to a network of peers across Europe; the ability for British firms to present at the Cartoon Forum event rather than simply attend; through to, for smaller companies, the ability to hold meetings on Creative Europe’s stand at markets.

Specterman-Green pointed out that “stakeholders across the creative industries already have deep and rich relationships which would survive any political scenario… I’m sure you’ll continue speaking to your counterparts” while also drawing attention to other frameworks like the European Convention on Transfrontier Television (ECTT) and European Convention on Cinematographic Co-Production (ECCC). He cited the former, which secures UK content as ‘European works’, as particularly important. 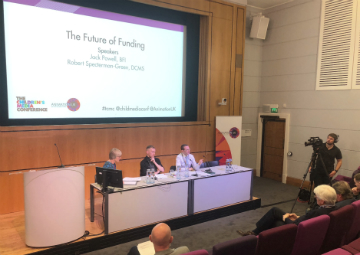 That convention “will continue after we’ve left the European Union in either a deal or a no-deal scenario, and the European Commission has confirmed that” he said. “I know there are some stories out there at the moment suggesting that is not the case, but let me clarify that now: it is. UK content will still count as European works.”

The session ended with questions from the audience, including this important point on a no-deal scenario. Projects approved for Creative Europe Media funding before the UK exits would have their funding guaranteed by the British government, and then at some point after that, a domestic replacement may launch. This, though, means a funding gap in between, for new projects that didn’t apply for Creative Europe funding before the cut-off point, but for which no domestic alternative yet exists. Is that a concern?

“It’s a very good question. The government guarantee is part of the answer, although I recognise that is backward-looking,” said Specterman-Green, who did not shirk the question’s implications. “My honest response is: we have begun some of the thinking internally at official level about what the options might be. But there will have to be further work done, and so I think it would be wrong of me to suggest that there’ll be some new provision in place from day one. That is partly what the guarantee is designed to address, but it won’t fill all of the gap, particularly – obviously – for new projects, before we have decided what, if anything, would be brought forward [to replace Creative Europe].”

“I’m not in a position today to say the gap will be X weeks, Y weeks, X months or Y months. I can give you this assurance: we in the Department understand the value of this fund, and the difference that it makes. And so there are already good fundamentals for arguing the case that there should be some kind of future provision,” he continued. “But there are so many other dependencies, in terms of other demands on finances, the political views at the time, so on and so forth. As a civil servant, all I can do is reassure you that we understand the situation; that we will do our very best to expedite decisions as quickly as we can; and then get in place whatever measures have been deemed appropriate.”

Specterman-Green ended the session by reiterating his request for producers and animation companies to help the DCMS to make the case for that continued support, if it proves necessary. Meanwhile, Powell pointed the industry in the direction of some useful, updated information: the Creative Europe Desk UK’s ‘Brexit Update’ page, and the BFI’s own page with Brexit questions and answers.

Director for Media and Creative Industries