With the advertised contributor, Nikki Lilly unable to attend CMC due to illness in her family, CMC moved quickly to put together something inspiring and challenging for the final thirty minutes of the Conference.

Who better than the Changemakers (and friends)?  A group of young people who had never met before, some from this year’s Changemaker team, one from last year’s (now moderating a session of her own at CMC) and one of the much-appreciated CMC volunteer team who had been in the Changemaker support crew. and got to know them through the course of the conference. The panel closed the event by discussing their opinions of the conference and industry, and what they hope for the future of media and diverse access to it. 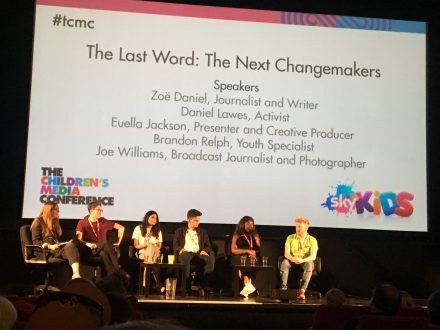 Although this panel came together for ‘The Last Word’ at the last minute,  they launched themselves in  like seasoned professionals.

Vicky Brophy moderated the group’s conversation. As  Changemaker Producer, she was thanked by CMC Advisory Chair Sue Nott at the start of the session for not only pulling together the panel but also the entire Changemaker programme at CMC (with an extra shout-out for Tom Outteridge the AP looking after the 10 young people in the programme).

It began with each of the changemakers being asked what they hoped to see in the conference in years to come, to shine a light on how it could improve the overall experience. Joe Williams (Volunteer) answered first, saying that there needs to be a greater connection between the volunteers and the guests. He suggested that by opening a dialogue between the two groups it would create a greater exchange of ideas and opportunities. Opportunities being vital for the young people who had committed to being there. Anything that could be done to provide opportunities for the student volunteers to meet professionals, and beyond the Conference itself to continue to network with internships and employment in mind – how could that be achieved?

The Changemakers Daniel Lawes, Euella Jackson and Zoe Daniels all raised diversity as their prime concern.  Not just BAME representation but also how to achieve greater outreach and subsequent involvement from under-represented socio-economic groups and the more marginalised, not just in the Conference but in the industry as a whole.

They said they know the reasons. But the industry’s under-representational profile  was not a valid excuse. In fact all the more a reason for CMC to respond and take action – and for the professionals in the room to give evrey thought to how they can improve access and to a lesser extent representation.  Best put by Brandon Relph, who said that “during Nadiya’s keynote looked at the audience in the City Hall and realised that this gathering was not that diverse”. Brandon said that some of them on the panel made it thinner business (in some cases literally) to pursue this agenda and some campaigned to achieve it.  It should be thought of as something wider than black and Asian representation, and include considerations of gender, identity difference, and disability, and that while they appreciated that the Changemakers themselves are a diverse group, they nevertheless felt the Conference  – and the industry  – could do more.

The diversity issue was front and centre when the floor was opened up for questions from the audience. Marcus Kenyon from Sheffield based animation company, Finger Industries explained some of their outreach programmes and initiatives to bring people into the studios,  and the panel agreed that getting out and meeting people is a great start. They all concurred that the best way to create content for a specific target audience is the give that demographic a voice on the creative team. He did have a concern about hiring someone just to be diverse, to which Brandon Relph replied with “Don’t hire someone just because, just be more aware.” 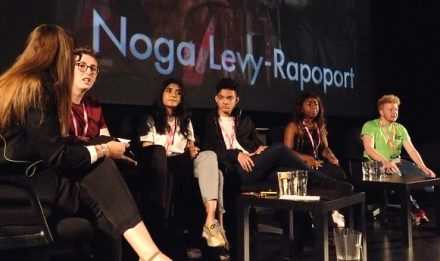 Zoe Daniel expanded by explaining that while educational opportunities are all well and good, in the end it comes down to money.  Money would need to be spent to make some of these opportunities more widely available, to allow a broader range of people the connections and resources to break into the industry.   There are groups of young people for whom entering the media never occurs as an option, as the cost of entry, unpaid work etc. is a massive barrier.  The industry needs to get away from practices which employ young people at the lowest possible cost and ensure that those being offered opportunity are also paid enough to be able to benefit from the experience,  no matter what their economic status.

Brandon Relph was insistent that taking these steps was good for people’s business. Including different viewpoints and cultures, enriched content and brought about broader  loyalty.

Euella Jackson went further. She made it clear that many individuals – whole swathes of society are being alienated due to the industry’s lack of diversity.  Alientaetd by what they see on screen, alienated by who they perceive o the making it.  “It’s not for me” is so commonly heard.  Even if media makers go into their schools to explain how the industry works – or similar – they are ignored. By not looking like the people they come to talk to, they immediately set off the thinking that this is “not an option for me”.   With that in mind, Zoe Daniels expanded by saying the current way of advertising work is  “just not accessible”. 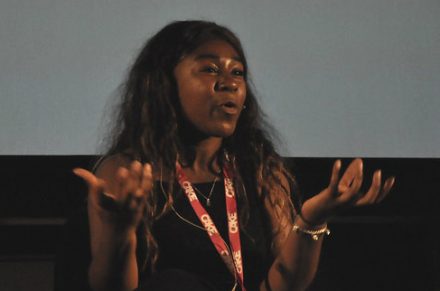 Euella encouraged everyone to persevere, and to expand their outlook when recruiting or explaining how the industry works.  “Go to the places you haven’t been before.  Make yourself uncomfortable. Be in the wrong part of town.” If you want to make a difference “Make sure when you walk into the room, you are the one who feels like the outsider”. Then you will not only know what that feels like to be excluded, but you will also have a better chance of achieving the interest of those you meet, as they will feel you have in some way crossed over the barrier.

Brandon and Daniel both felt that social media has given a whole generation the opportunity to create their own content and to become true influencers – not in the limited definition of the word used by mainstream media.  There was a sense that unless the existing media structures engage differently, more fully and deeply, more widely  and more inclusively, then this generation of young people will by-pass mainstream, and default to their own content hosted where their peers will see it. The industry has to reach out to them – as this change is a catalyst that is only expanding as time goes on.

Responding briefly and informally from the floor for CMC, Deputy Chair of the Advisory Committee Marian Edwards, said that CMC was taking steps to implore the value of their Conference time of r volunteers.  She reminded everyone that speed meetings for the volunteers to meet industry people take place for an hour after the close of the Conference – and that in future maybe people might want to themselves volunteer to take some. 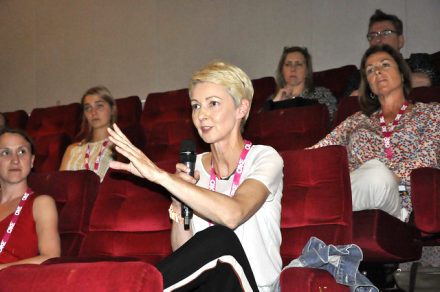 She also said that CMC ran a Facebook group for all the volunteers and tried to use it to spread information about training initiatives, internship opportunities and job chances – but we receive very few offers for the group and she wondered how that could be improved.

The Panel all reacted swiftly – “by not being on Facebook for s start”.  Brandon explained that the best alternatives for both advertising and contacting young creators are TicToc, Snapchat, Twitter and Instagram.  Marion pointed out that we still need to industry to step up and make the offers, but more effective use of scocial media made sense.

Vicky Brophy brought the session to a close, thanking the Changemakers for not only this conversation but also the panel that the Changemakers had produced this year at CMC on youth activism.

She asked them in closing to pick a word that summed up their feelings about the conference and the industry. They unanimously chose: “Change”.

Delegates left for their trains, planes and automobiles with something to think about. 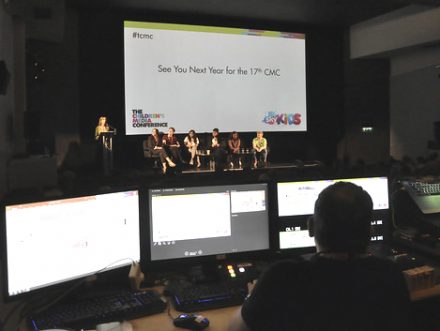