An award-winning video-game styled comedy show where the audience take to the stage! The Incredible Playable Show draws on elements of clowning and improv. comedy to blend gaming with performance. Every person in the room should feel they made the show unique. Each performance is different and, with the audience as the stars, there’s no telling what might happen. 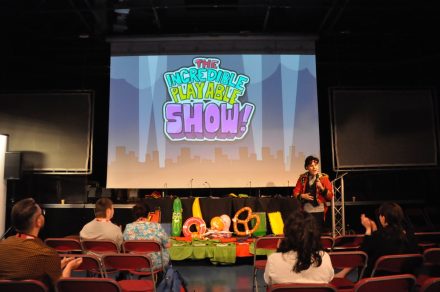 Alistair Aitcheson introduced himself as a showman and immediately put the wheels in motion. This was the second iteration of the Show at CMC – the previous lunchtime and seen Show number 1.

Two audience members took on the role of codebreaker; with the simple use of red, green, yellow and blue buttons. The audience became Bletchley Park who aided the two volunteer codebreakers, or spymasters. If the whole event wasn’t already full of stress and suspense, the timer count-down added an extra layer.

After electing two captains, one for each team, it was their duty to navigate the on-screen Sonic through various levels of the game in a head-to-head race. This was aided by advice being shouted from the team members. Despite some technical difficulties and neither team even able to finish the race, everyone was in high spirits. The two teams shared a ‘signed’ Pikachu photo as a prize.

The audience donned wearable barcodes and the newly ordained supermarket floor managers used devices to scan these barcodes. Each barcode brought up a photograph on-screen. When two consecutive scans revealed matching photographs, the aim of the game was achieved and the scanner moved on to the next barcoding task. Of course it helped to remember which photographs had shown up previously so that when you got a ‘match’  you could go back to its identical twin immediately and scan it.

A representative of the audience won a ‘signed’ Pikachu photograph and the chaotic hilarity was brought to an end. 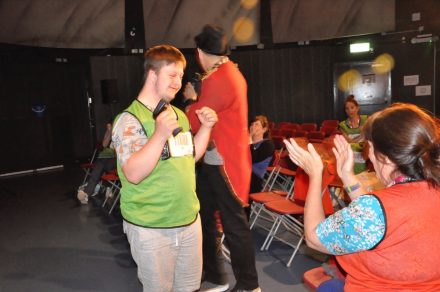 Peter has worked as a freelance producer, creator, writer and development executive for Disney, Nickelodeon. Fox Kids, and Studio 100. He has two published novelisations of 'The House of Anubis' - 'The Eye of Horus' and 'The Cup of Ankh' (which sold 110,000 copies). Peter was instrumental in bringing Lime… Read more