Report – Gambling and Gaming: What’s the Difference? What’s the Harm?

Gambling within video games is a real concern for parents and kids alike. What is the nature of the relationship between gambling and game design, and what responsibilities do we have as a community? 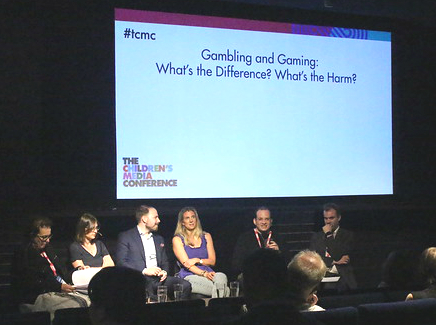 Children are introduced to gambling at a young age through social media and advertisements, 12% follow gambling companies on social media and 7% say adverts have prompted them to gamble when they otherwise weren’t going to do so. There is an aggressive campaign by gambling companies targeting children to ‘groom’ them from a young age and encourage the next generation of addicts argued Liz Ritchie, from Gambling with Lives.

He argued that the term diluted the negatives and pointed out some key differences: people don’t spend thousands of pounds on ‘Kinder Surprises’, or sell them for thousands, and even in games where no money changes hands, the social cache of a full loot box is a powerful driver to play on, so addictive behaviour is being stimulated and rewarded, even when no cash changes hands. Children are pressured into fitting in with peers.

Alex Kallman elaborated on the multifaceted appeal of ‘Loot Boxes’. Video game players can use them to gain an edge on their competitors which in a competitive environment heightens the appeal. He raised the point that it can also be a cultural thing which has a social currency.

Heather Wardle warned that the behaviour of gambling addiction presented itself even when there was no monetary value in games used by teenagers. With no resources to gamble away there is a smaller risk in the short term, but there is a much more damaging effect on a teenager’s mental health. The addictive behaviour has been ingrained into them.

Annika Lindberg also suggested that an addict has episodes relating to this, such as extreme highs and lows which are compounded further by isolation and depression. The correlation between suicide and gambling addictions suggests that a gambling addict is 15 times more likely to die via suicide.

This was a highly charged and, for many in the audience, emotional session, which left them disturbed by what they had heard – as much of the severity and prevalence was new to most of them.