This session explored the way in which class and socio-economic background is (and has always been) an important driver of diversity on and off screen. This panel discussed personal and professional experiences of why inclusion is imperative at all levels. 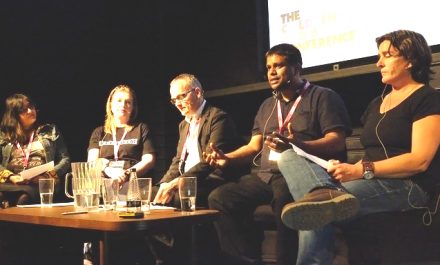 This session saw four speakers who were united in their passion for eradicating inequality across various media industries. By changing the way our young people are taught to think about how they can access opportunities, the panel discussed that although certain pathways to opening doors are becoming more accessible – the barrier can sometimes be met at the door itself.

Becky Bainbridge observed the way teenagers and young people interact with their peer groups, but also with the types of media that often portray working class families. Her work at Reclaim aims to provide leadership skills to individuals who all have big dreams and aspirations, but sometimes lack the practical steps in order to achieve them. Her belief first and foremost was “if you can’t see it, you can’t be it”.

The panel discussed together the fact that it’s no secret that nepotism can run deeply through our institutions, and although many young people are finding their way into certain industries, the question echoed by all speakers was whether they are welcomed with open arms when they get there?

It’s the practical things, Natasha Carthew argued, that are sometimes the most important questions to be asked – and much of the time they are overlooked. Have you got enough money for the bus fare? Can you take time off work to attend an interview? These sorts of financial barriers typically mean exclusion from the get-go. With factors that limit participation, it’s no wonder that many industries have a circle of influence that doesn’t reach beyond the usual faces. Bringing authentic voices to the table is of course, one side of the issue, but how best to keep them there is another matter entirely.

Shajan Miah spoke about key decisions he had to make when starting his career. Breaking into a tough industry like journalism, juggling a job on the side and studying too – Shajan observed that there were several pros and cons to consider. Things like work experience and working for free being one of them. He recognised the structural issues of the past that are still embedded within certain institutions, (for example there has never been a Black Sports Editor at the BBC) and he also suggested that this is and will be a problem for the future if things don’t change.

Greg Boardman reflected on growing up in Blackpool and being the first person in his family to go on to higher education and university. With a media CV including titles such as ‘Rastamouse’ and ‘Apple Tree House’, Greg said his experience of telling diverse stories hinged on working with diverse teams of people. Injecting an element of the theoretical into the conversation, Greg quoted Bordieu’s notion of habitus – talking the audience through the ideas of perception of the world around us and how things work best when creatives and producers support and nurture children’s desires.

The narrative of the underachieving working class kid has gone on too long, Becky said. They want to do big things but half of the problem is they don’t know how to get there. Often in their families or social circles it would be brave to work in these roles and it’s not normal for them to want to be a doctor, writer, sportsperson etc. when they grow up.  She said typically “it’s the adults who knock the aspirations out of them”. So how then do we as an industry find a solution? Well, for starters, let’s change how we recruit – the panel suggested. If prospective employers look at skills and not make a judgement call based solely on making the grade, we can all encourage young people to develop innate skills without obsessing about demonstrable qualifications.

It’s not perfect, but it’s definitely a start in forging the path to representing all people as authentically as possible.

Gabrielle joins the CMC for her 4th year to work with the blogging team. With a passion and interest in film, television and children's media - Gaby is a researcher at the British Film Institute, with previous experience in academia, and has published in IJOSTS and has written for BAFTA… Read more