In the case of the comeback phenomena of ‘The Clangers’ and ‘Paddington’, the people who remade these classics thought there were many more stories to be told and were inspired to create many more. This is not always the case when reinventing classic children’s intellectual properties, as this session explored. 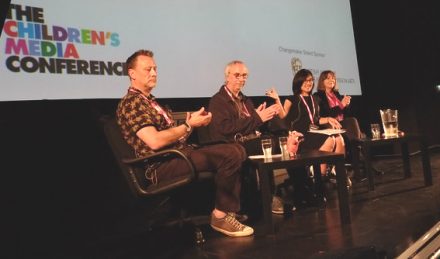 As well as bringing along his special Clangers swannee  whistle, Dan Maddicott also showed a minute of the original moon landing tablecloth episode and the new version too. Originally ‘The Clangers’ coincided with the first lunar expedition – so it’s now the 50th anniversary both!  In an odd coincidence too,  it is also the 50 year anniversary of ‘Monty Python’ which of course starred Michael Palin, who is the voice behind the narration of the new Clangers.

Dan commented that he had been involved with restoring the original tapes, and always felt that with digitization there was a new series to be had. On talking with Daniel it became clear this was the case although it took many years before it was and he produced. Peter Firmin was very much involved in re-creating the series right up to his untimely death. He contributed a sketch of the entire planet and lots of artwork.

Daniel Postgate used to play with the original Clangers puppets as a child. He always wanted to create new and interesting characters but was not too keen on working with stop frame animation as he had seen his Dad work endless hours on this. After many years in publishing, he was delighted to become involved with his Dad’s catalogue.

Rosie Alison reflected that she very much enjoyed the original ‘Paddington’ books as a child. She revelled in the oddness of this lovely bear, but also liked the simplicity of his philosophical outlook – although he could always freeze you with a Paddington stare! Of course back then, he was an immigrant and refugee. In re-creating the Paddington intellectual property this is very much back on the agenda as a topic of discussion.

Sharon Miller commented on how they cast the voice behind the bear. She noted that Colin Firth was originally cast a bit too old and didn’t have quite the resonance they were looking for, and so after many auditions they plumped for Ben Whishaw. His voice has the same sense of wonder and he is wide eyed and intense when reading.

Revealing some behind the scenes secrets she said that as voice director on the Paddington series her notes to Ben Wishaw are usually along the lines of ‘what is Paddington thinking?’

Illustrator, Children's Author, Writer and Producer of The Clangers

Peter has worked as a freelance producer, creator, writer and development executive for Disney, Nickelodeon. Fox Kids, and Studio 100. He has two published novelisations of 'The House of Anubis' - 'The Eye of Horus' and 'The Cup of Ankh' (which sold 110,000 copies). Peter was instrumental in bringing Lime… Read more