Before the PSB reps began we heard from Ruda Santos, the young Changemaker who discussed storytelling, why we do it and what young storytellers can bring to the table. We then began what was almost a shopping list from the broadcasters. 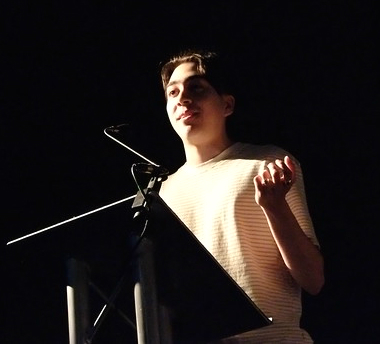 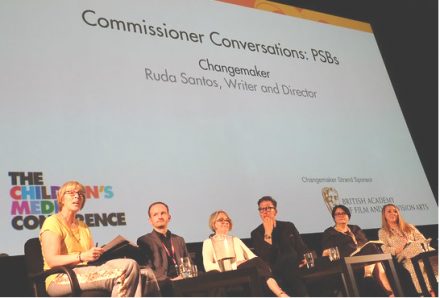 Simon Tomkins of CITV showed their reel including lots of commissioned animated content due to be broadcast in the autumn. His wish list for commission mainly included live action, including scripted comedy or drama series, a game show and live action make and do. One of his co-workers later in the session was keen to point out that they will still look at animation commissions.

Sioned Wyn-Roberts of S4C then showed their offerings including shows addressing discussing death with young children, being different and accepting of the differences in others. They are keen to commission a 7+ show with a strong female lead, ambitious drama for 9-13 and an innovative teen format.

Karl Warner of C4/E4 discusses the launch of their new teen channel on YouTube. The 3 pillars they look for are aspirational, funny and real. He was also keen to emphasise how the fund has opened opportunities to the broadcaster to allow them to take some risks. He then showed their new show ‘Dead Pixels’ which, in his words, demonstrated his love of ‘high quality knob gags’. It’s a show that manages to crossover between gaming and live action in a new and innovative way.

Louise Bucknole of Milkshake and Nickelodeon had unfortunately lost her voice, so she was joined onstage by Louise Maloney of Milkshake. They showed their slate of pre-school shows. They are looking for animation for 2-5’s. They are British-centric in their approach to broadcasting. They are also increasing their broadcast hours from 30 to 50 by 2021.

Questions included diversity of audience and the commissioning of fact ent. They were then asked for their favourite commissions. Simon and Sioned – ‘Project Z’. Karl – ‘Pants on Fire’, Louise – ‘Peppa Pig’.

Sarah was a radio presenter with XFM up until 2007, when she left to start an animation company. Her first job was writing interstitials for Sesame Street, and from there she's worked on projects both big and small, as well as running a number of successful YouTube Channels. Sarah's passion… Read more