In April 2019, the Department for Culture, Media and Sport published the White Paper on “online harms”. This session questioned whether we are finally resetting the dials on the internet to make it truly friendly for children and families. Considering high-profile cases, such as the tragic death of Molly Russell, the White Paper demonstrates the a governmental responsibility to safeguard the activity of children within their ‘digital playground’. However, as the panel clearly expressed, the protection of children online cannot rely solely on government policy.

Content producers, brands, parents, schools and the platforms themselves all have a part to play. 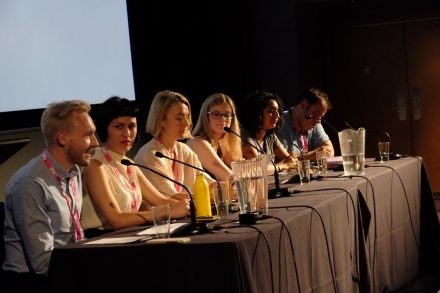 Our host for the session, Richard Wingfield, summed up the purpose of the internet with simple yet poignant clarity, in that, the online environment strives to protect human rights – not undermine or weaken them. The key question to the panellists, therefore, is how can they support this shared goal through their varied organisations and services?

Bruna Capozzoli a kids and family content creator for brand owners. With Popcorn digital having been founded by leading global brand agency, CAKE, Bruna’s passion for encouraging high quality, innovative and engaging content for children was not surprising and nor are the kids brands within the organisation’s portfolio including ‘Angry Birds’, ‘Oscar’s Oasis’ and ‘Angelo Rules’. However, whilst excellent content undoubtedly enriches a child’s online experience, the challenge lies in harnessing the good and the valuable whilst blocking out the bad and the ugly.

Although companies like Popcorn Digital have been working with YouTube for the past two years by publishing incredible, much sought after and kid-specific content, Brenda Bisner opened her presentation by quoting YouTube’s policy which clearly states that the site is prohibited to under 13 year olds. In likening a child unsupervised on YouTube, to a child playing in the middle of a busy of road – she said the whole notion is madness when compared to the offline world, where a parent holds their child‘s hand to cross the street. Brenda then showed a video with the key powerful message being that “ it only takes a second to go wrong” – exactly like in the real world.

When considering this analogy, it’s not surprising that Kidoodle has over 500+ million customers, reassured by their  consumer promise that all content is screened by real people and not algorithms. The latter can be highly problematic (to say the least) as pointed out by Joanna Booth. She called for more pressure from platforms to standardise compulsory age ratings on published content and a clearer, more informative process when it comes to reporting harmful content.

Whilst restrictions and activity for children online are essential to their wellbeing, John Kent expressed strongly that it is important that children have the same rights as they do offline. He went on to explain that a “walled garden” in the digital space is not necessarily the answer and real word teachings have a place. As John explained, you don’t build a wall around a gambling shop on the high-street – instead you explain to children the harms of going inside.

The notion of parental values was agreed by all panellists as an imperative channel on the approach to securing child safety online and should absolutely co-exist alongside government intervention, platform systems and content producers.

Maithreyi Rajeshkumar, from Children International, played a short winning film of the organisation’s young people’s film awards. This reminded the audience of the web’s powerful purpose – “I wish for the internet to be positive, inspiring, and equal for everyone”.

Jenny has substantial experience in producing and marketing live events for children’s focused IPs and brands. She was previously Festival Director for large-scale family festival LolliBop. As well as attracting 45,000 visitors, Jenny was responsible for commercialising the event through high-profile experiential brand partnerships with the likes of John Lewis, H&M… Read more