Two back-to-back presentations providing thought-provoking research considering today’s media landscape, both on and offline. Research 3 looked at attitudes regarding who makes the rules on age ratings as a point of contention and debate. Combining independent research and the BBFC Public Consultation, the panel delved into some of the concerns of how aspects of sexual violence and threat are portrayed on screen. Research 4 focused on the unique streaming service HEIHEI, and the way in which New Zealand has introduced innovative ways of supporting home grown media and local kids’ content. 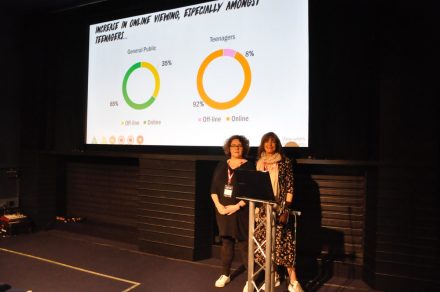 Children and young audiences today are more voracious in their consumption of media than ever before, with a notable increase in online viewing, especially amongst teenagers. In fact, research co-presented by Lucy Brett and Nicky Goldstone from BBFC suggested that 73% of teenagers check the age rating in the cinema all, or most of the time, compared to watching movies online. Whilst some streaming services have ratings, others do not. So finding appropriate material online can be a challenge for some viewers, (not to mention their parents and guardians). Keeping in mind the broader societal picture and what is happening in the world they are growing up in, viewing habits also come with some overarching concerns – from both sides.

What is clear, Brett and Goldstone observed, is that today’s viewers form an incredibly media literate audience and generation, who are often acutely aware of their own peers’ needs, mental health issues, violence and sex on screen. The impact of sexual violence, (or even the implication of it), can be troubling for many viewers. With most children getting their hands on their own smart phone or device from age 10 and up, the notion of self-regulating and censorship can be difficult territory to tread. The BBFC are tackling this issue, working closely with young audiences and their parents to provide suitable age ratings and classifications across all film and VOD platforms – including Netflix and Amazon. The full report is available to read online with detailed guidelines and an updated internal policy.

Teenagers are undoubtedly some of the most critical self-regulators out there, but the research also shows that they do want some guidance and they are increasingly cautious about what they are watching. In an overwhelming world of constant content, is the genie out of the bottle? Should we rely on children to self regulate themselves in unchartered territory?

With a relatively small population size of approximately 5 million people, and no dedicated public service media, producers of children’s content in New Zealand found a solution in HeiHei- an ad-free streaming service. Pronounced ‘hey hey’, it also means chicken or commotion in Maori, the country’s first language. Notably in recent times, many free to air commercial channels have been losing their audiences to Netflix etc. However, this has also impacted the audience in other more culturally specific ways. The research showed that children were not finding linear content and instead accessing entertainment online. Kids On Screen, the campaigning body, have been advocating hard since 2012 for more dedicated and age specific material online, whilst also situating New Zealand’s children in their own content. Developed by TVNZ and NZ On Air for audiences aged between 5-9 year olds, broadly focusing on entertainment and education. Originally aiming for 25,000 users, after 10 months they now have 90,000 app users and 120,000 internet browsers. With a 600 percent increase on projections and the majority of the top ten being made up of New Zealand created content the service has been considered a resounding success.

To ensure the success remained, in August 2018, 35 children from across the country were asked about their experiences; with a positive response overall, parents and children alike were happy with the elements of interactivity and also an embedded educational value.

When asked her opinion on Britain’s contestable fund and how to avoid a similar situation as New Zealand’s, Anna Potter poignantly observed, “Do not limit the producers by allowing the same few to be the only ones funded to create content”.

School of Creative Industries, University of the Sunshine Coast

Gabrielle joins the CMC for her 4th year to work with the blogging team. With a passion and interest in film, television and children's media - Gaby is a researcher at the British Film Institute, with previous experience in academia, and has published in IJOSTS and has written for BAFTA… Read more