With a panel of industry figures from across the kids’ media business, this session discussed the challenges of finding and moreover holding a preschool audience, in the midst of an ever more fragmented landscape. 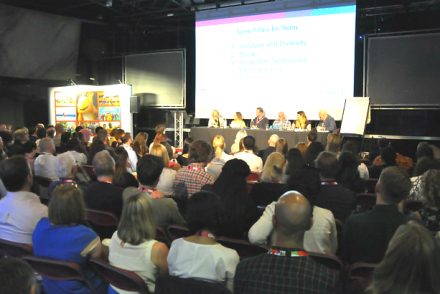 With a universal audience, there is a need to tell relatable, authentic and skilfully told stories in order to teach children about emotional intelligence, human values, knowledge of the world, cognition and sense of identity. Jodie Morris opened with the topic of inclusivity and diversity and explained that in ‘Bing’, nothing is prescriptive which keeps the brand universal. Children and families in China worry about the same things as children in the UK. Inclusivity and diversity are essential if you want to reach the widest possible audience.

In a discussion on the social aspects of the industry, Sarah Broad talked about taking over the ‘Wissper’ social media accounts and how they have had to find other ways to connect with parents. With ‘Wissper’, the show’s eco-friendliness has been harnessed as a way to connect with eco-aware ‘millennial’ parents. Sarah acknowledged that the plan was to help leverage toy sales, but in a way which didn’t take away from the show’s core values. They haven’t yet figured out how to do that! The experience is different on shows with a more adult aesthetic, such as ‘Sarah and Duck’.

Jon Benoy talked about production techniques. He explained that Moonbug were in the business of acquiring brands and IP in the kids and family space, and that primarily they were after the audiences connected to those brands. Jon used Morph – a 2D animated show, created for YouTube – as a case study. The ‘secret sauce’, he observes, is their speed and lead time. This led to some discussion of whether or not ‘good enough was good enough’ – or perhaps speed to market and quick success was preferable to the slower and more crafted approach such as ‘Bing’.

Christopher Skala in his discussion of merchandise observed that the word ‘toyetic’ is heard less frequently these days. The old model, he noted, was that signing a master toy licence would often be part of the funding package for a new production. This caused problems for creators who were squeezed between demands from toy companies and public service broadcasters. Christopher said that we now have what he called “Content Monopolisers” such as Netflix and Hulu. The deal they offer is that in exchange for getting a show made, a content creator hands over all of the rights. This pushes ‘toyetic’ concerns into the background. The game is content ownership in total because the audience don’t care about the age of an IP.

Finally, Lynsey O’Callaghan spoke about platforms. She observed that the viewing habits of the preschool audience have shifted hugely in recent times, and they are, in fact, the most likely to consume content on tablets. Lynsey pointed out that Nickelodeon’s partnerships with affiliated pay-TV broadcasters like Sky and Virgin are key.  As these audiences are not on social media platforms, Nick need to be where kids are – such as on YouTube or the Nickelodeon app.

The key as always is characters and stories that the audience can fall in love with. She pointed out that the biggest merchandise hit over the past 10 years was ‘Peppa Pig’, a show which was not designed with merchandise in mind. Above everything else, a show needs to be funny and well written in order to be a true success.

Sam is a freelance writer and script editor. In his (almost) 20 years in the business, Sam has created a dizzying number of episodes of some of the best loved kids' programming on the planet. His greatest hits include 'Bob The Builder', 'Thomas & Friends', 'Fireman Sam', 'Claude', 'Digby Dragon'… Read more