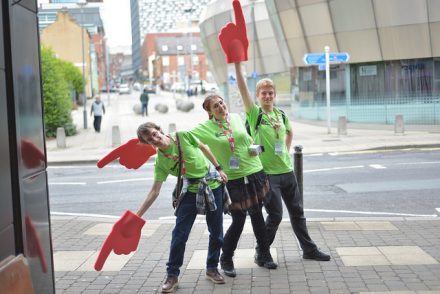 For the first time, the Children’s Media Conference is scheduling this session aimed squarely at writers, script editors, show runners and anyone who works (or wants to work) with them. Becoming a writer – and getting paid to do it – is a tough ask. So, what are the ways to break though in an ever-evolving media landscape? And more importantly, once you’ve got that first break, how do you get traction and maintain a career? And when you’re not the fresh face on the block anymore, how do you keep moving on to greater and better things?

These are the topics that we’ll be discussing in the HUBS Common Room on Weds 3, 12.30 – 13.30. And we’ve gathered a fantastic panel to help shed some light on the path to being a professional writer:

Andrew Brenner was the head writer of ‘Thomas and Friends’ for many series, and creator of animation series ‘Huff’ and ‘Pablo’.

Omari McCarthy is a regular CMC volunteer who works in production, but recently acquired an agent and his first professional writing commission on ‘PJ Masks’.

Simon Nelson is development producer at BBC Writersroom, who has worked with writers in comedy, drama and Children’s across TV, radio, and online.

Emma Reeves is a double Writers’ Guild Award winner in the Children’s TV category. Emma co-created CBBC’s ‘Eve’ and been integral in bringing such shows as ‘The Dumping Ground’ and ‘The Worst Witch’ to the screen.

Annette van Duren is a writers’ agent based in LA, who has an overview of the International Market.

Catherine Williams started as a script-editor. Now a screenwriter, she has been head writer on a variety of pre-school animated and live action series, including ‘Chip and Potato’ currently available on Netflix.

Not forgetting our moderator, Dominic Macdonald, a writer/producer/director who knows a bit about what notto write as well as what you should.

We aim to have a relaxed discussion  with audience contributions encouraged, to seek out and share those precious nuggets of information and insight that can make the writers working life so much better.

Darren previously worked in film events (The British Animation Awards, Cinema 100) and as a film editor (‘The Cramp Twins’, ‘Captain Pugwash’) before writing full time. He has written across the age ranges on television, audio, and online for shows such as ‘Bob the Builder’, ‘Peter Rabbit’, ‘Sabrina: Secrets of… Read more