This year, the Children’s Media Conference is offering up something different over your packed lunch. The Incredible Playable Lunchtime Show is an interactive video-game comedy show where you, the audience, take to the stage and play the game. 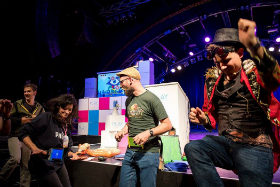 Become human buttons, take on the Power Rangers, zap each other with barcode scanners and play Pac-Man using inflatable toys. The Incredible Playable Lunchtime Show is a hilarious CMC innovation which puts you at the centre and gives you the chance to unleash your inner kid.

The Show is created by Alistair Aitcheson – a game developer creating mobile and tablet games, educational games, interactive performance and playable installations. His work is known for its emphasis on physical activity and social interaction, and his games have won awards at the IndieCade and GameCity festivals, and are installed in the UK’s National Videogame Arcade and Berlin’s Game Science Center.

Alistair’s believes it’s what a player brings to the game themselves that makes it unique, meaningful and memorable. A good game is a springboard for the player’s own creativity. He says the most important question a game designer should answer is “why should I care?”

The Incredible Playable Show draws on clowning and improv comedy to blend gaming with performance. Every person in the room should feel they made the show unique.

You can see how it works here:

Each performances is unique and, with the audience as the stars, there’s no telling what might happen. Whether you come to one or both, you won’t want to miss the event that everybody’s going to be talking about on the train home. It’s the perfect way to let off steam between sessions and meetings, or to just sit back and watch others become cogs in a hilarious machine.

After nearly five years working both on and off air in local radio, Matt joined CITV in 2008 as a Presentation Scheduler. Matt had a short stint working in the promotions team, before being tasked with setting up a Media Planning operation for CITV. In April 2011, he took over… Read more