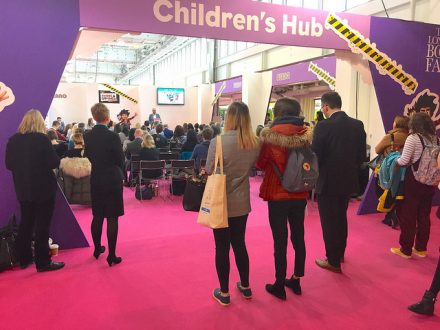 The Deep goes from comic book to global success.

Children can contribute their own creatures to The Night Zookeeper

Elma the Patchwork Elephant follows Roald Dahl to the stage.

Tim Patterson told the audience that this session would look at how stories can leap off pages of a book to film, TV, stage and beyond. How to broaden out the brand and maybe, even make some money.

First to speak was Alison Warner of Technicolor, to talk about their hit CBBC series, The Deep. They have achieved in just five years, the transformation of an Australian comic book into a global brand. In 2013, Alison was presented with the book by its author, Tom Taylor. He was a comic book writer of mainstream US titles such as Superman but wanted to write something younger for his kids. The half-hour animated adventure series is now in its third series with a fourth planned. It has sold to 180 territories and is the number one show in the UK kids charts. But it was also planned as a 360 project from day one with Bloomsbury as the book partner and toy deal with Simba in Germany. They’ve invested heavily in social media and it’s not just the children but the parent that engage with the show.

Joshua Davison, Founder and MD of Night Zookeeper, got the idea while researching Harry Potter fan fiction and realizing the potential of engagement with children. So his zookeeper with time-travelling elephants becomes a multi-platform children’s brand. At its core is the question, ‘can you invent us a magical animal for the Night Zoo.’ It started as educational software to help develop children’s writing skills. Three books have now been published by Oxford, with a fourth on the way. The animated series is for Sky Kids. It’s not just a straight forward series, kids can be involved with elements from the show from sound effects to inventing creatures. Parents and their children are able to register on the Night Zoo website.

Elma the Patchwork Elephant is thirty and an established classic character. Along with established children’s titles such as ‘The Very Hungry Caterpillar’, ‘Guess How Much I love You’ and ‘James and the Giant Peach’ it has been adapted for stage by Selladoor, one of the fastest growing theatre companies in the UK. Its producer, Alexander Parker, said that Elma wasn’t just picked because of the sales figures, it’s because of its longevity. The shows tour Britain and then travel to Asia, Australia and Europe. They don’t really stop showing so there can be a substantial return on their investment.

The final speaker in the session Jenny Worton, Artistic Director of Theatre at Roald Dahl Story Company which was set up by the Dahl estate. It is unusual for an estate to be actively involved in the IP. Set up a year ago, as producers, taking an artistic lead and working with artists directly so that there’s no middleman between them and the work. They work with different partners depending on the varied content of the Dahl stories. ‘It’s not about being faithful,’ said Jenny, ‘more about capturing the spirit – the essence of Dahl. His timeless voice in the contemporary world.’