A hands- and head-sets-on workshop on getting to grips with the world of virtual – and how to use it to create good content.

Moderators Ray Maguire and Alison Norrington expressed from the get-go that VR is an ever-growing technology. Brands like Playstation, Oculus and HTC are funding further development of stereoscopic cameras and pinpointing tracking technology.

In order to become a successful virtual reality company, Ray explained how a typical business model should base itself around two areas: price of equipment, and the output of content and experiences that are available to the consumer. Surprisingly, Samsung is making bigger strides in the industry, marketing themselves on being much more affordable than other competitors and focusing on short form content. 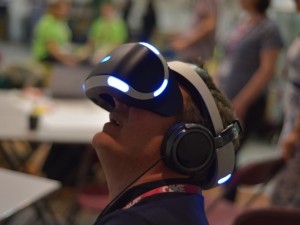 Alison opened by explaining how allowing kids to play with VR is a polarising topic. However, she added, through the best practices and design being developed, VR can become an acceptable entertainment option for kids.

There needs to be a major emphasis on storytelling in VR as many different aspects including genre, message and core themes can help turn a good immersion into a great immersion. Concepts borrowed from sound and light design, psychology and even architecture could help with creating a perspective within a narrative.

Alison advised that “writers should aim to keep their content short and leave their audience wanting more. Under-deliver and over-perform so the pay off is greater.” 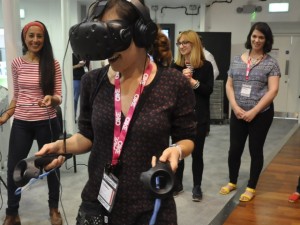 During the break, delegates were able to try out the many VR experiences available. The big hit was Peter Caddock’s ‘Titanasaur’, which gave the participant the ability to interact with dinosaurs and wander through a pre-historic world. A practical exercise – pitching a reimagined version of The Three Little Pigs allowed delegates to step into the shoes of developers. One notable idea was a Minecraft ‘beat-the-clock’ concept which got such a positive reaction that it might not be too far from becoming a reality. (Virtually?)

By the end of the session, people left feeling more informed, as well as overwhelmed at the pace of growth and opportunity in the VR industry and what it can do for the future of children’s entertainment. 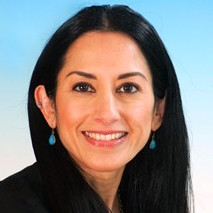 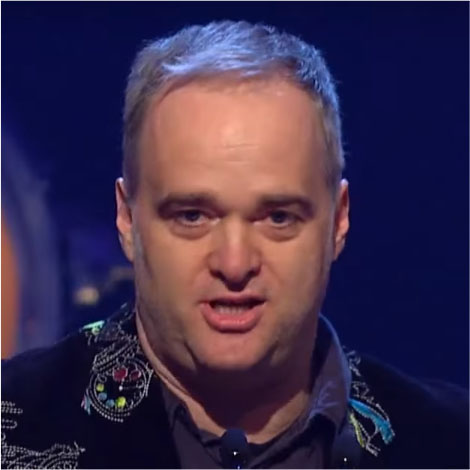