Based at Cantor Gallery, the Playground is open to all. An interactive digital art exhibition featuring cutting edge digital technology – mixing play and interaction for children (and big kids too)! Games, apps, toys and even VR to immerse oneself in.

With free admission to all, the Playground is a component of the Children’s Media Conference you won’t want to miss. Carefully curated to showcase some of the UK’s leading artists, innovators and developers – this exhibition is interactive digital art that will spark your imagination.

With so much to see and choose: from Autogami Tomato to Makey Makey Go and Tangles – these projects are on display and available for play, bringing STEAM projects (science, technology, engineering, art and math) to the gallery space. Get cosy and crouch down on a beanbag to watch the work of LitFilmFest– A Tale Unfolds. This selection of films written, performed and filmed by primary school children (between the ages of 7-11 year old) creatively bring together the literacy objectives of a traditional English lesson with the digital skills of filmmaking.

Playground 2017 also includes Play Osmo Pizza Co – a games system which takes the play beyond the screen through allowing a physical object to become a digital game piece. Run your own pizza shop as characters onscreen ask you to arrange various toppings on a pizza base as quickly as possible. You will also need to calculate change and invest your profits to upgrade. This game encourages development in key areas such as mathematics and nonverbal communication and it opens up the possibilities of interlinking technology and physical play. 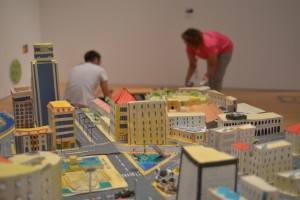 The real world meets virtual possibilities in the Future Aleppo Project. The hand-made model created by Syrian teenager Mohammed Kteish, brings Aleppo back to life through an impressive paper craft cityscape. With Creative Producer Alex Pearson’s VR prototype, the user enters Mohammed’s world as it was: flying over the city and viewing fallen Syrian landmarks. The immersive journey is accompanied by a detailed personal account, translated for this project. In a collaborative effort between the Kteish and Pearson, the city that Mohammed was forced to flee has been digitally preserved through VR, helping and encouraging all children to re-imagine, rebuild and remember.

Gabrielle Smith is a final-year Ph.D candidate at Northumbria University, Newcastle and is a film and television studies graduate from the universities of Aberdeen and Glasgow. Her current research explores the role of the British children’s television presenter. She has spoken at several international conferences, including the plenary panel of… Read more