The old funding model is dead.
Is it the gatekeepers who make sure only quality is produced? Absolutely not. 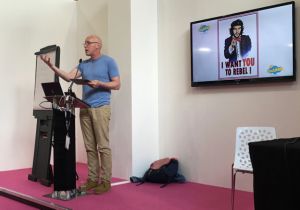 Christopher’s gave an entertaining, if self-deprecating, talk about how he and his business partner, Will Brenton, set up TaDaKids – a Kid’s YouTube channel with private equity funding. He focused on the financial restraints on making new content and freedom from broadcaster ‘interference’. When developing ‘Mike the Knight’ at Hit Entertainment, Chris was not allowed to give Mike a sword, not even a wooden sword.

YouTubers rely on building up audiences in order to benefit from Google’s advertising revenues for income. Christopher had calculated that, in the best scenario, they could only afford a budget of $500 per minute to make a show. Having been used to budgets, at HIT entertainment, many times that figure, a whole new way of thinking was needed if they were going to make the full CGI, full 2D and puppet shows they were planning.

‘Carjax’ is a boy targeted show: it’s a racing crash show in CGI. To keep to the £370 per minute budget, reusable assets were created and, in many sequences, only the voice over was changed.

Unlike ‘Mike the Knight’, which took three-and-a-half years to develop, there is a fast turn-around with this model. But what about quality? Is it the gatekeepers at Nickelodeon, Disney and CBeebies who make sure only quality is produced? Chris’s opinion is, ‘Absolutely not.’