Manimation 2015 opened with great excitement in the spectacular new facilities of  Home Manchester, produced in collaboration with Manchester’s new Animation Festival, hosted by Andy Wyatt head of the new animation course from Manchester Metropolitan University and Chair of the new Manimation Advisory Committee. Andy thanked the funders – MIDAS and the other partner organisations.

The aim of Manimation is a knowledge exchange event celebrating the diverse work in the region, bringing together children’s television content, VisFx, new media, games and technology with a combination of panel discussions, presentations and showcases. 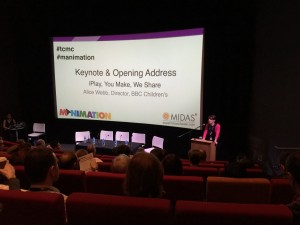 The Opening Keynote by Alice Webb, Director of BBC Children’s was really upbeat about the future of animation in the UK and had an exciting announcement to make!

Alice is in charge of two children’s channels (CBBC and CBeebies) and also champions the interests of children across the BBC.

Alice has been her post for less than a year, but builds on a 10 year career in media, and previous lives as a civil engineer and a management consultant.  She also lives with three discerning audience members – her three children give her plenty of feedback on content!

So – how do we keep up with the kids?  The BBC invest constantly in research into the rapidly changing ways that children are consuming content.  There are 12 million kids in the UK.  They are cheeky, bright imaginative and haven’t made up their minds yet about life.

In spite of having more access to digital than ever before, 89% of children still want to watch TV. There’s a huge take up in On Demand content, 25% comes via I-Player with over ½ a billion downloads of children’s content. Lots of children are using social media, in spite of being under the official age of using – which brings challenges to a public service broadcaster.

So what’s the BBC going to do about it? Its going to stay core to it’s public service values and roots and sustain an unwavering commitment to UK public service content which informs, educates and inspires children across genres which is reflectiveness of the diversity of the lives of UK children.  But this needs constant re-invention, they are always looking to do this in new ways.

Alice talked about the BBC’s proposed new children’s service  with the working title iPlay.  This will be a single online front door for children to all  BBC content.  This is in early stages of development and a lot will depend on the BBC Charter review, but is ambitious and exciting.

iPlay will be the on-demand platform for CBBC and CBeebies content, but also a window for children to access other age appropriate BBC content including news, sports content and live events and potentially other content from organisations such as the RSPB, the Natural History Museum or Sport England – a “public service portal”.

Children will be able to create a personalised menu, offering a safe environment for children to interact with others and also to engage in dynamic and exciting  learning and making.

Animation has a very special place in the hearts and minds of the BBC.    Alice described current times as “not quite a golden age”, but certainly a “highly buffed brass age”.

Animation brings amazing positives and just a few challenges ahead.

Alice has some big hoorays for animation in the UK!

The BBC loves animation – it provides vibrant, stimulating characters and provides audiences with a blend of humour, safe jeopardy and subtle education which generates new understanding and immediacy for an audience.

The BBC remain open and interested in whole range of new ideas.  They pre-buy acquisitions at development stage and support producers throughout the production process.

In spite of all the “hoorays” there are still some challenges:

So if you are pitching a new show idea, there’s fierce competition.  From over 1000 show ideas pitched, CBeebies have committed to just 4 of them.

However it only takes one idea – the BBC are interested in ideas which are bold, distinctive and different.  They are always looking for brilliant, big ideas with heart at the centre.  Check out what is already on the channel, but don’t pitch us a show that we already have – do your homework and really tell us why we need your show on our channel.

Alice then made an announcement of a new fund for animation!

In collaboration with BBC Worldwide, CBBC is launching a brand new animation initiative, an amazing opportunity to develop the next generation of UK animation companies.

anim8 is an open call for UK creative professionals, offering innovators the chance to pitch for funded development which the BBC hopes, in time, will lead to the creation of a range of UK animated properties that have genuine global appeal.

The scheme launches today (19 November), with a deadline of 22 January 2016 for initial submissions. Entrants will be taken through a “multi-stage development process” with the winning project being taken to pilot stage in April next year.

Entrants need to have a minimum of 2 broadcast, published or digital credits for commissioned work.