CMC: You Get Out What You Put In

As CMC 2015 gets closer, we’ll take advice on how to get the best out of the Conference  from the people involved – as delegates, speakers, sponsors etc…

…and at the same time we’ll learn something about their “day jobs”. 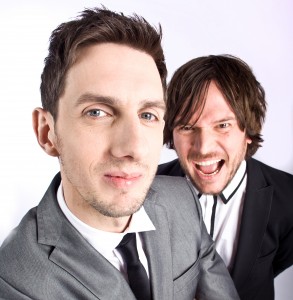 Banks & Wag are award-winning London-based composers of music for media.  Their kids’ credits include ‘ZingZillas’, ‘Friday Download’, ‘Blue Peter’, ‘Newsround’, and ‘Wanda And The Alien’.  Most recently, they have written the score to the feature film ‘Up All Night’. www.banksandwag.com

Ah, the Three-Day Jolly, so beloved of media folk everywhere.

Whether it be the free merchandise, the inside info on future productions, or merely the thirty minute bath without a five-year old asking for help with their Lego, the Children’s Media Conference surely offers something for everybody.

But that’s not all.  When we arrived at the CMC last year – bearded, bedraggled, and squinting in the Sheffield sun after weeks in studio on Nickelodeon’s ‘Wanda And The Alien’- we weren’t just attendees.  No: we were PANELISTS!  We were STARS! OK, not stars.  Panelists.  Alongside our talented and successful arch-nemesis Richie Webb, we were there to impart so-called pearls of so-called sonic wisdom about the dark art of so-called music composition, to an excited CMC Wednesday Workshop audience.

Music, it seems, is a world shrouded in mystery.  Sure, everyone knows how to light a shot, how to plot a scene, how to nod pensively during exec producer notes – but music?  Where does it come from?  How does it happen?  What does a composer need to know in a brief?  How can you get what you hear on the radio for a fraction of the price and an even smaller fraction of the time?  (Hint: you can’t).  Banks & Wag (& Webb) were there to share.

So many shows wait until the week before the dub to start thinking about music, but given how powerful music can be in driving emotion, clarifying narrative, or unifying scenes, why not get a composer in when production starts?  Not only might these early creative discussions influence the stylistic tone of the series, but you will actually give us composers more time to write, to mix, to perfect the music.  You know why “Uptown Funk” sounds so good?  Mark Ronson spent a fortnight just on the guitar.  That’s what composers are like.

Create a detailed brief.  Good composers can help producers find a common language using non-musical vocabulary and musical reference points, so that both parties have a clear definition of what they’re aiming for.  Then: trust your composer.  You hired them for a reason!  The worst brief from a producer is “I’ll know what I want when I hear it” – it’s like asking a decorator to come to your street, hoping he’ll not only choose the right wallpaper, but find the right house as well.

If you want to skimp on the music budget, you can – but you’ll probably attract a certain sort of composer* with a certain sort of sound*  (*A crap one).  Computers and samplers can create all manner of amazing tricks, but if you truly want your show to sound like Taylor Swift or the London Philharmonic, you’ll have to splash the cash.  That doesn’t have to mean breaking the bank.  Even one or two additional live instruments can radically enhance your soundtrack.  Even that one extra sample or reverb plug-in can transform your song from a B-side to a hit.   It may add a few hundred pounds to the music budget, but in terms of adding quality to your production it will be money well spent.  Come on – you’ve met composers, right?  We’re not wasting your money on fashionable clothes, let’s face it.

After setting up our stall and selling our wares, the conference became a whole lot more joined up.  Having introduced ourselves to a huge chunk of the UK’s programme-makers, we had overcome that awkward first meeting and opened doors to conversations about future collaborations with creatives from across the media landscape.  Furthermore, having consolidated our own thoughts on making programmes, we were able to take away a lot more from other speakers’ panels, whose experiences invariably crossed paths with ours.

CMC 2015 – we look forward to seeing what you have to offer this year, once we’ve left our underground studio bunker (52 episodes of CBeebies’ ‘Go Jetters’ to write) and resurfaced in bustling Sheffield.  We know from experience that, much like TV production itself, you get out of it what you put in.

FACT: Banks graduated in Composition from London’s Royal College of Music. FACT: He used to play keyboards for Busted, Sugababes, and The Wanted. FACT: He once got Derek Griffiths in a headlock by mistake.  Yes, Banks is the less hairy half of composing team Banks & Wag, whose kids’ credits… Read more