The BBC has a rich history of programmes for radio and television that originated as children’s books. ‘The CBeebies Bedtime Story’ continues the tradition of ‘Jackanory’ but what else is the channel working on. Vanessa Amberleigh, Executive Producer for In-House production at CBeebies, discussed current projects with John Lomas-Bullivant. 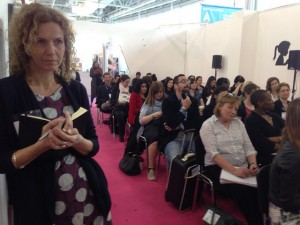 Vanessa gave the audience a brief overview of CBeebies, explaining that it is not just television; they produce radio and interactive content as well. She said that Kay Benbow’s budget is split into three sections, a percentage for in house production, a percentage for independents and a percentage that can go to either.

They are looking for content that includes learning with a small ‘l’, and a lot of programmes come with an educational consultant attached to them. They like programmes voiced by children, but realize that they grow up quickly; Charlie and Lola’s voices were replaced every series.

The channel’s demographic spread is parents and guardians (grown-ups have their own internet pages) and two sections of children, up to four then five and six year-olds.

The session was about book-based content, but we were told that there are no current shows made by the in-house team that originated in publishing. However, BBC Scotland produce the popular ‘Katie Morag’ series. Based on picture books, it is a live-action show made in the location in which the original books were set. Interestingly, an animated version was pitched to CBeebies first, but it was not able to find international finance. Another live action book based show is ‘Topsy & Tim’ from independent production company Darrall Macqueen. Vanessa described this as the nearest thing to a soap on CBeebies, with story arcs which include topics like moving house. Then there’s ‘Bing Bunny’, the show described as almost an animated reality show, taking day-to-day problems that children face.

Vanessa was clear that the relationship between the children’s book and CBeebies remains as strong as ever.