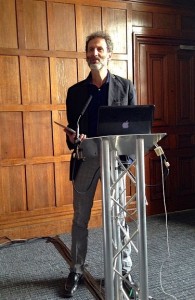 David Kleeman (PlayScience) opened the second CMC Rights Exchange in the busy surroundings of the massive London Book Fair, on Children’s Day (16th April 2015) at Olympia, London. He gave a research-based view of the topic: ‘Books and Beyond‘.

The event producer, John Lomas-Bullivant introduced the return of the Rights Exchange and its purpose to bring together literary agents, publishers, producers, broadcasters and interactive developers to seek out new partnerships around IP.  He promised a day of  transmedia sessions in the Exchange itself, for its 70+ delegates, and in the main Children’s Hub for general visitors to the Book Fair.

Books and Beyond – Takeaways


CMC Editorial Director, Greg Childs introduced David Kleeman (based in New York) as CMC’s most loyal contributor, having spoken at every conference in the last 12 years.

David took us through PlayScience’s latest research with figures that confirm the growth of e-reading amongst American children. Although the research was from the US, David thought that the findings would probably be similar in Europe.

American kids are choosing tablets because they do all the things they used to do on computers, on television and in print, with boys now spending more time with the touch screen rather than print. The good news was that kids and families still want good stories.

Parents still favoured television as the best option for the whole family and computers were not deemed to be child friendly. Games were the least important for parents.

David talked about the blurring between two powerful markets – publishing and television and asked the questions: ‘What is TV?’ and ‘What is a book?’

On the first question David asked delegates to consider that we live in an era where a YouTuber can wake up in the morning and tweet to 2 million followers to find out what they want to see them do. A programme is then made for next to nothing in one day and uploaded that evening. He compared this to traditional programmes  made in massive studios and shown on TV channels.

The findings also showed that parents were keen to buy a digital version of a book for their children if it had additional content. The growth of added extras from publishers is moving the e-book towards something that resembles television content. However, David warned that these extras were often a distraction from reading for kids.

And as for the future with the publishing and broadcast worlds continuing to blur; David thought it was unclear if parents would want to move to yet another subscription service, if publishers moved to a Netflix style service for children’s books.