A day of exploration of every aspect of the current animation scene with a special emphasis on Manchester and the North West.

Cubic Motion is a specialist facial animation studio based in the Science Park near Manchester Museum.  They produce niche games industry and feature film facial animation.

The technology he uses to create their work was impressive.  Typically up to 50 cameras can scan the face of the  actor.  With this they create a library of 70 or 80 expressions.  The data from this in transferred across into an animation rig. Compatible sequences are assembled and can be animated.  They also have stereo capture cameras which enable 3D data to be captured.

He showcased some of the high quality work that their company has been achieving and the techniques they have developed. 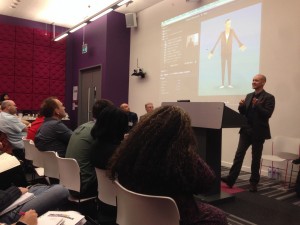 Matthew Gyves introduced Animal – a new software which is part of Adobe‘s After Effects suite.  It has the ability to motion-track movements and realtime lip-synch onto a 2D character from a person performing to a web cam.  It can be rigged in different ways with buttons to portray different emotions.

Artwork for Animal can be created in Photoshop and Illustrator, which is built in layers to transfer into the software where it can be animated.

Matt demonstrated a basic example that he had made in 33 minutes in his hotel room the night before.  The system makes it  possible to develop an idea in a very short time.  He suggested it could be used for character development or pitching work.  With the right talent this could easily be turned into something of broadcast quality.

Through use of the Creative Cloud Adobe can innovate quickly and respond to feedback from users.

There is an opportunity for animators to help with BETA testing and the development of Animal, so get in touch with Adobe if you would like to be involved.

Mainframe is a motion graphics and visual effects studio based in London but also in Manchester.  They work across TV advertising and Channel Branding, with one of their biggest clients being Nickelodeon.

Chris Hardcastle explained there’s a lot that goes into what appears to be a simple shot.  They use an array of software and techniques, including Nuke, Photoshop, Matte painting, Full CG, 2D plates.  They use a mixture of Maya, 3D Studio Max and Cinema 4D.

They’ve invented MASH, a procedural animation tool for Maya which they have sold to other CG companies.

EON Reality have an office in the Central Business Park in Manchester.  Ken Swain discussed their growth to a team of about 240 staff.  They make immersive environments and augmented reality. They work across a wide range of sectors and that has included a virtual aquarium, work for big theme parks, in engineering, medicine, architecture and edutainment.

They use a combination of 3D studio Max, Adobe products and put things together using their own engine.

They are seeing a surge in demand for their services as technology improves.

Toon Boom is a global 2D animation software company based in Canada.  Their products Storyboard Pro and Harmony are well used by companies worldwide in over 130 countries. Lindsay Watson revealed that they are the only software company to have won an Emmy, of which they are very proud.

They work closely with animation companies to continually develop their products and upgrade their software annually.

The company has a lot of knowledge how different companies work all over the world, and can provide advice and consultancy on how to set up animation pipelines and international co-productions.  Their website holds lots of helpful resources for animation producers.

They have also developed games pipelines for Disney, which they are now able to offer other companies.

They showed an impressive showreel including animated features such as ‘Chico and Rita’, Disney’s ‘Frog Princess’, ‘the Simpsons’, ‘Spongebob Squarepants’ and ‘Belleville Rendezvous’.

Andy Wyatt then explored how they all innovated; how a smaller company can keep ahead of the game and compete with big global companies; and how their technology can benefit animation production in terms of pipeline and budget.

The panel debated the important role of innovation, and how each company manages to keep at the cutting edge of technology. Chris Hardcastle from Mainframe described their in house technical team who develop bespoke software to give the creative team the tools to ensure the work mainframe do is both creative and innovative. One such piece of software called MASH, which enables users to have complete control over particle systems within Autodesk Maya, has not only won a CG Award for innovation, it has been developed for commercial monetisation and licences have been sold to visual effects companies all over the globe, including MPC.

Innovations such as niche proprietary software, often developed by small companies are still what drives much of the technology and innovation in creative business, and for those small innovators, this can become a viable income stream.

Adobe described their in-house research teams which develop new products. But despite being a global company, which dominates the creative technology markets, Adobe still have their two original founders, John Warnock and  Charles Geschke working on new innovations and they are very hands on. Adobe also described the way they involve their users to help steer how their technology develops.

The conclusion of the debate suggested that streamlining production pipelines is not just the job of big technology companies. Small innovative companies can also benefit monetarily from technology development.