A day of exploration of every aspect of the current animation scene with a special emphasis on Manchester and the North West. 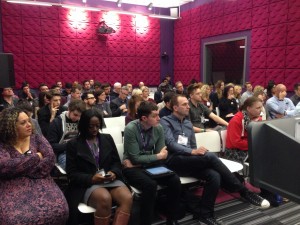 Cathal began by taking the packed audience through the years of developing the company, its techniques, changing its focus to 3D production and away from advertising into long form animated series, revealing a couple of Oscar nominations along the way.   Brown Bag are now one of the busiest animation companies in Europe with 5 series currently in production.

He described some of the creative conversation which go on when pitching for projects, in particular recalling the process of persuading Disney that ‘Doc McStuffins’ would work better in 3D – and the resulting $500m merchandising property is now part of TV history.

Then came the drum roll!

Cathal revealed that for some time Brown Bag has aspired to set up a 2D division.  They looked at Dublin, and Berlin, but eventually decided on Manchester.  Work is already under way on building studio facilities at the Sharp Project and the plan is to employ around 40 people.

And the strategic message  – be responsive to change