The CMC Rights Exchange – an Experiment in Relationship Building 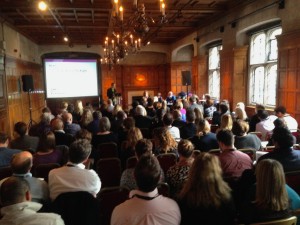 On 7th November, the worlds of television and publishing collided in the wood-paneled splendor of 2 Temple Place on London’s Embankment (once the offices of the Astor shipping company).

The Rights Exchange – an Experiment in Relationship Building 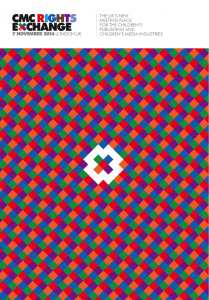 The day was the brainchild of Transmedia John Lomas-Bullivant of Kickback Media. It was heralded as an innovative event to highlight new forms of collaboration in children’s brand creation – going beyond old-style licensing of book properties, and developing new forms of relationship between the various players in the value chain. This was not sufficiently served by other markets which specialised in TV, interactive or books and where efforts to meet are frustrated by their size.  So a new focus on the potential in partnerships between specialist expertise to create stronger projects with a longer life.

It was, said CMC Editorial Director Greg Childs an experiment to test the appetite of the children’s sector for these new ways of working.  Or, as he put it in his welcome address, we were all lab rats and what’s more, we’d paid for the pleasure!

The plan was to explore new ways of working in the morning’s conference content, followed by an afternoon of structured meetings – aimed at building those new relationships.

We had a two-for-one deal on the opening Keynote – setting the scene from the perspectives of a broadcaster and an investor.

CBBC’s Sarah Muller gave the broadcasters’ point of view on how books translate into the television sphere, highlighting just how important they are to children’s broadcasting. There used to be a time where publisher’s chased the ‘big Hollywood deal’, but now, thanks to recent drives for high quality episodic drama in the adult market, television is once again a point of first contact. She believes we are entering a “golden age” for TV drama, and that book adaptions, with their ready-made fan base and fully resolved worlds and characters, mitigate risk for broadcasters.

She talked through the phenomenal success of ‘Tracy Beaker’, showing what can be achieved if you aim high. Sarah spoke of how Jacqueline Wilson brings a very special quality to the brand and how effectively and consistently her characters and stories engage children, which is he key to the series’ success. And there have been many series going well beyond the original leading character and now translating into spin-off story webisodes as well as TV. Working closely together, author, publisher and broadcaster have created a cherished brand from what was initially a series of books.

This sentiment was echoed by our second keynote, Simon Flamank from Bob&Co. For Simon, investment is about a connection with the project and whether it initially manifests as a book or TV offering or something altogether different is all the same to him. Talking us through the four newest entries into the Top 20 US brands (the holy grail of brand creation) Simon demonstrated how different starting places produce the same results. The ‘Harry Potter’ book series (first published 17 years ago! Pass me my walking stick); the animated TV series ‘Ben 10’; the ‘Angry Birds’ app; the website ‘Monster High’ – all are now successful in books, merchandise, movies, TV, and have digital presence online and in aps. The value of these brands does not reside in the platform they choose to start in or their route to market – it’s in the initial creative idea that connects to the audience. Achieving these journeys increasingly requires cooperation across the divisions of large companies or between partners with the expertise needed to make the presence comprehensive.

Panel: It’s All About the Rights!

The day moved on to a panel discussion of how rights ownership helps or hinders long-term brand development. 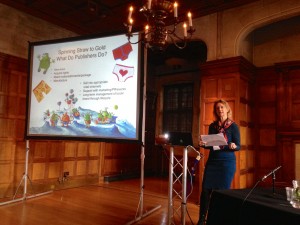 Ingrid Selberg from Simon & Schuster UK talked us through how publishers spot and nurture a good idea, shepherding it through to something that will reach a wider market. She feels that the success of brands such as ‘Thomas The Tank Engine’ and ‘Beatrix Potter’ has been partly to do with the publisher owning the rights outright and being in control of the development of the brand – for Ingrid, that was her comprehensive way to achieve brand extension, consistency and longevity.

Arguing from the perspective of the author was Philippa Milnes-Smith of the L.A.W. agency. She explained that until the author chooses otherwise, then the only controller is the author, and that rights segmentation in some shape or form is essential – she has rarely come across a publisher that can produce TV, and TV producer that can successfully publish – holding back allowed a package of participants to be controlled from the creative centre. 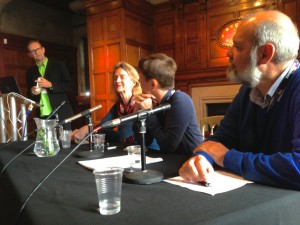 Michael Carrington from the Foundation (the children’s live-action production arm of Zodiak Media) explained how acquiring rights beyond TV is vital for them as they need to exploit the brands off-air to make money – the TV rights alone are not always enough.

Philippa felt that imaginative and long term vision, bringing stake holders together, can enhance the success of a brand. Michael echoed this sentiment and expressed that bringing the platforms together is the only way to make something extraordinary in a world when the audience are so mobile.

Peter Curtis and his company Nurture Rights are well on their way to turning a best selling picture book into a multi platform global brand for pre-schoolers. Peter, whose history is in television production, acquired the rights to the picture book ‘Dinosaur Roar’ over two years ago. It is a rare picture book in that it had been published by a family-run company and yet, even without the weight of a publishing giant, had achieved sales of over 5 million copies. It is a picture book with no story and no obvious characters, but is engaging, warm and humorous. Peter seized upon this opportunity and is turning this gem of an idea into a global brand.

His strategy started with brand partners and he managed to clinch the best one going for a dinosaur brand: The Natural History Museum. This strategy seems unusual for an entertainment company however, with this partner comes not only expertise and a stamp of authority, but a platform for the idea in the form of an interactive exhibition for pre-schoolers.

The next stage was to look for a new publishing partner to realise the collectable storybook strategy. He found this with Penguin Random House. Having settled the publishing partner, the company is moving on to its multi-platform approach and plans to launch an online world. They also have an App partnership with Immediate Media, a magazine deal with Egmont, a stage show deal with The Birmingham Stage Company… but as yet – no TV!

Peter explained that TV is part of the strategy – just not the first part. The online interaction and online gaming aspects of the brand make it very attractive to partners and with all the other platforms for the brand, there’s enough going on to get people excited. His thinking is 360, on and off screen. An approach that clearly impressed the audience.

Put Your Money Where Your Mouth Is – Character is King!

One of the most memorable sessions of the day reprised the most popular session from the CMC in Sheffield – and invited four illustration students to pitch character ideas to publishers from Puffin, Bloomsbury and Macmillan. They had six weeks to come up with a character and present ideas for the world and stories in which they inhabit. It gave publishers the chance to find something they’ve never seen before! 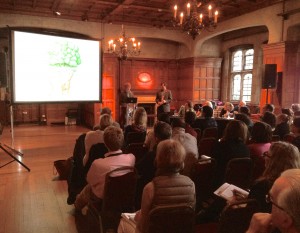 All the students looked suitably nervous as they faced the three dragons, and each presented overwhelmingly impressive and original drawings. Characters ranged from a thimble-haired bird to a robotic dinosaur to an owl gradually morphing into a mouse. All ideas had a unique charm and style but it was the hilarious Grotsby Snot, “a cross between Mel Gibson in Braveheart and a lump of plughole gunge” that stoked the dragons’ fire.

Natalie Eldred, a mature student from Anglia Ruskin University in Cambridge, presented us with her ink-splatted vision of Grotsby, literally drawing from experiences with her own children. Stephanie Barton from Macmillan immediately expressed her interest in the idea and it seemed like she had it in the bag until a last minute call from Emma Blackburn from Bloomsbury had them in the game and the bidding began! Both publisher’s bids matched the others’ and it came down to a pitch from them about what their respective companies 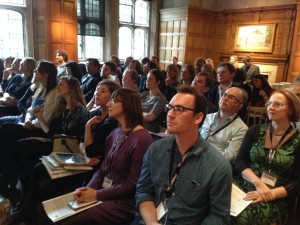 could bring to this character and potential brand. In an excitement filled atmosphere, it was Bloomsbury (playing the ‘Harry Potter’ card) that finally won Natalie over and cash was exchanged in return for the option. A fast-paced, fun-filled, exciting example of how the idea is everything. After today’s sessions who knows where we’ll see Grotsby next? On bookshelves, pyjamas, tablets, pencil cases, DVDs….. (And in a moment of pure theatre Adam Freeman’s Dinosaur was snatched by Scholastic in a bid from the audience!) 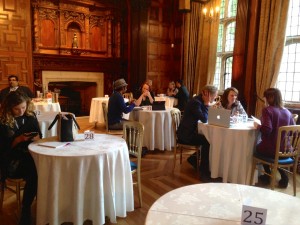 After lunch came the fun bit: 286 nattily organised meetings between delegates spanning all sectors, armed variously with ideas, IP, skills, funding and access to audiences. Dusty slants of winter sun shone a spotlight on the meetings between broadcasters, agents, licensors, ideas makers, students, publishers, script-writers, producers, consultants, business affairs experts…phew! It was musical chairs as the bell rang every twenty minutes, ensuring the meetings were kept tight, to the point and in abundance. The pre-booked meetings using the unique CMC Meeting Mojo system continued all afternoon in the upper halls, while the auditorium below quickly became the place for the informal on-the-day encounters which must have nearly doubled the number of discussions clocked up by 5pm.

The experiment was working. The lab rats had responded to the stimuli. The rooms were buzzing, and business was being done. 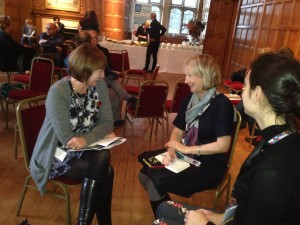 Overheard at the event:

“This feels like too much fun to be work!”

“It’s so good to finally get the publishing world with us.”

Alison Stewart, Head of CBeebies Production, Animation and Acquisitions said: “Because it’s the first time for this event I wasn’t sure about how broadcasters were going to fit. But actually in terms of production and acquisitions I have met people who I wouldn’t usually come into contact with, and meeting them is really relevant. It’s been a very useful afternoon. I’ve made several new contacts that I’ll follow up.”

Philippa Milnes-Smith from the L.A.W. writers’ agency commented, “It’s great to see so many people here – the large hall is full to bursting! It’s an interesting and balanced coming together of people from different parts of the industry and at different stages of development. Meeting them adds fun, grit and the unexpected! If you’re going to take a day out the office then it has to be productive – and it’s a bonus that this has been fun too!”

Marcus Kenyon from animation company Finger Industries (who furnished us all with drinks afterwards – thank you very much!) felt the event was, “Relevant, interesting, well done and inspiring!”

The Macmillan Children’s Books publishing team felt the day was, “Very inspiring. Great for introductions and we’ll be following up some meetings.”

For first-time producer Sonia Copeland-Bloom the Exchange was a revelation: “I suspect I will always remember this as a very special day – as so much interest was shown in my project, and I walked home with my head in the clouds and my feet not touching the pavements…”

I’ll leave the last word to Mellie Buse from Adastra Creative. “I think it’s been terrific. Well done to John Lomas-Bullivant for making it happen!”

Katie started her career writing bar reviews for grown-ups and online content for children. After a brief foray into writing questions for pub quiz machines and learning about VFX magic at Hogwarts, Katie started to work for various parts of the BBC’s Children’s division. Katie has been involved in the… Read more