Vote for the CMC candidate on the Red Carpet at Cannes

Angela Salt needs your vote to get to MIPCOM

Walking the red carpet at the 30th anniversary of MIPCOM and enjoying VIP access to the official Opening Night Party sounds fun but there is a serious reason independent content creator, Angela Salt, of Fun Crew is polishing up her vintage Vivienne Westwood platforms and trying to WIN the ‘Be the Star of MIPCOM 2014!’ photograph competition on Facebook. The prize includes free registration worth 1,300€ and as ”the next global market for Fun Crew to explore” that’s the real incentive behind the seemingly star-struck striving that’s seen Ange in second place in the Facebook poll in recent weeks.

It’s a constant challenge for small indies to get their ideas seen and considered by the people who could help turn them into marketable media but there are ways to become more visible. 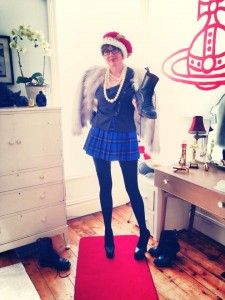 Children’s media people are SO into platforms right now…

Angela says, “The CMC is brilliant at supporting new and upcoming creative companies and has provided the foundation for all our endeavours. We’re currently in development with Technicolor on an exciting animated pre-school comedy as a direct consequence of participating in a live-pitching session at the conference in Sheffield. Being actively involved with the CMC has given us the confidence to venture further out to pitch ideas, beyond the UK into global markets. We’ve been part of the official CMC UK@Kidscreen delegation in New York for the past three years and are keen to sign up for that again in 2015 because, as it relocates to Miami, we’ll be reassured that the practical support, mentoring and brilliant networking opportunities the delegation receives will remain consistently superb.”

Ange is one of life’s “joiners-in” – and can see the win-win in the situations we create at CMC.  So we’re behind her all the way!  And if Angela does win the Be the star of MIPCOM! Competition she has promised to walk the red carpet in 7″ heels making full use of the platforms (!) to promote The CMC and UK@Kidscreen.

Please support her if you can by voting for her photograph (@ANGEFUNC) by clicking the link – the final deadline is 15th September: