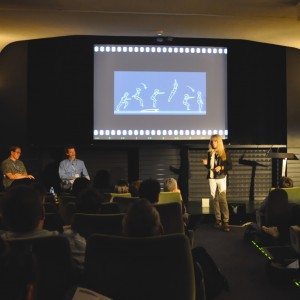 Firstly, a big hand for David Kleeman, who heroically stepped in at the last minute when Dr. Simon Moore was unfortunately unable to join the panel of this session. In the end, he contributed to this wonderfully detailed little session which predominantly focused on innovative new ways of assessing the engagement of young children in content. It’s a complex area which conjures much debate, so we could only really get a taste of the whole picture in this 45 minute session, but what we did get was very more-ish!

David was up first, talking about his work (or indeed the work of his colleagues he said he had phoned since discovering he would be on the panel!) in psychophysiology. David’s company, PlayCollective, have been using sensors hooked up to people facially (and in one such picture used as an example, David was the guinea pig himself) in order to decipher their emotional responses to content and their level of engagement with it. Although proving effective, David explained that they are not yet using this work on children, as there are big ethical considerations around it.

By contrast, Jacqueline Harding’s work for Tomorrow’s Child is used exclusively for monitoring the level of engagement in content in very young children only. Using natural observation (but years of painstaking development!), Jacqueline’s work is based around the notion that Children see narrative as a progression of moments, and, therefore, their engagement can be judged in isolated moments. The best way I can hope to describe this  in this blog is by referring to the example used in the session, which was the video clip of ‘Bing’. In the opening sequence, there is a moment in which the character of Bing falls over. As this is a big moment for a child, causing embarrassment and upset, they identify with Bing and this can be confirmed the observation of their reaction to this moment, as children often use their bodies to react to how they feel in a moment. That’s really only scratching the surface, and such has been the lengthy development of this study that, in reference to David’s presentation, Jacqueline remarked that it would be much easier to ‘just stick something on them and find out whether or not they’re engaged!’

After the technology was explored, the session was wrapped up with both David and Jacqueline taking a short Q&A and then offering some takeaways in conclusion; the key is being open to the response of the kids and adapting to them, regardless of the technology. It is being used to enhance their experience, not ours, and the ethics surrounding such ‘experiments’ need to be considered.

‘It was a real eye-opener in terms of thinking about the way kids want to interact, and not just how we want them to interact.’ – Andrew Efah.