The digital publishing market is heaving with talent and beautiful products but can it hold it’s own against the physical book market? 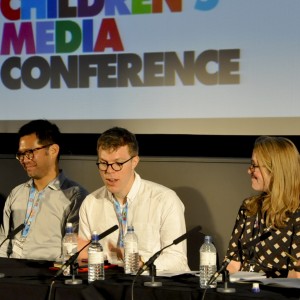 Eric Huang is Development Director at Made in Me a digital children’s bookshop. Half of the the revenue Made in Me gets from Me Books is in selling the books, the other half comes from marketing, such as digital book give aways on cereal boxes.

Instead of continuing the conversation about the transition from physical to digital, the possible death of print etc. Eric wanted to talk about other things. About alternate revenue streams for stories and stories that are being represented in ways other than just e-books.

Tom Bonnick from Nosy Crow who create both books and apps in a single year they publish around 60 books and just two or three apps. They initially developed their reputation on their apps rather then the traditional publishing side of the business. Founded in 2010 they started publishing 2011 starting at a similar time to iPad taking the world by storm, which kind of led their thinking and strategy.

Stephanie Gauld a Digital Publisher from Egmont who “bring stories to life”. They feel digital is one of the best tools for doing this. ‘Jelly & Pie’ is one of their current projects it’s a game and YouTube channel.

Federico Dini from Honig Studios presented their gorgeous illustrated story project ‘Milli’. Milli is a small snail who goes on very big adventures filled with magic on Apple Tree Hill –  lovely! Milli has over 100 friends and her stories are told slightly differently across three platforms: books, tablets and TV. Designed to be favourite bedtime stories – Milli’s world is made it to be returned to.

Antonio Gould worked on Teach Your Monster To Read for the Usbourne Foundation. When starting out making the games they asked teachers what their biggest problems were teaching reading. The teachers said it wasn’t so much that kids didn’t get it, more that they were struggling to focus. Usbourne felt they could tackle this best with a game – something really fun to sustain the engagement of the children learning to read. The game is designed to take the child through their learning from the first ‘s’ sound through to complex sentences and this can be done both in the classroom and at home.

The question of revenue and discoverability was raised. Apparently getting support from retailers and mainstream press coverage has a similar impact in physical book publishing as with digital. Nosy Crow see noticeable spikes whenever they get a review in mainstream press. One of the other strengths for them was launching with fairytales as people search online for stories such as ‘red riding hood’.

Stephanie Gauld said that user experience is key to the process. When they started out with JellyPie the carried out user surveys on what made the audience laugh. They got responses that included; Tom and Jerry, Harry Hill and ‘the class clown’ Stephanie said it was made clear from the start that the tone of voice needed to be by children for children.

The panel agreed that being picked up by Apple and being a featured app had great impact, although Eric made a good point that its actually more valuable to be on the second band down, rather the one at the top as this moves and the second band everybody sees.

52 storylines and a world bible gives Milli’s world depth and certainty and has helped the brand strategy. They’re still looking for a publishing partner or publisher.

Antonio went to talk to loads of people and parents to get advice about marketing and ended up with a huge list – 90% of which didn’t work. They cut a lot of it out, one amazing thing they discovered was that as a charity they are eligible to £10k of Google Adwords for free. The strongest marketing asset they have is a community manager who just talks to people about the website. They’ve found teachers to be the main driving force, sharing this amazing free resource between themselves.

In Germany, specifically in Berlin, Honing Studio have been able to take advantage of public funds. They’ve had access to financial support to enable them to make prototypes within a crowd funded process and they get to keep all of the rights. The digital products are free but its about building a brand to make the money from toys and products.

Kate Wilson of Nosy Crow raised a point from the audience “we have to have apps that make money, the money we spend on apps at the moment I’d much rather spend on shoes or wine”

Antonio pointed out t that there is currently a natural limit to what people will spend – parents will happily spend £10 on a beautiful physical book, spending the same on a beautiful digital book is currently not going to happen, but this will change. We need to make ourselves completely invaluable so that eventually people will pay. But it will take a long time.

You can find full details of the panel in the Session Guide.