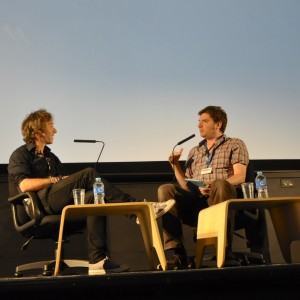 Michael Acton Smith started by taking us on a brief history Mind Candy, where they have been and why this is the direction they’re going now.

The idea for Moshi Monsters developed from a sketch done on a napkin in a coffee shop. Mind Candy have created a lovely world for kids to explore in a digital space. Somewhat tongue in cheek Michael conceded that Mind Candy “tried not to over commercialise it, but some of our fans were so desperate for content…” – much to the amusement of the audience.

The move to mobile for Moshi Monsters was, and still is, extraordinarily difficult – the amount of regulation and competition along side lots of other challenges they feel they haven’t really “cracked it” yet.

He said that Mind Candy decided that maybe a game wasn’t the way to solve the problem. He said they knew that kids like creating, sharing and showing off. Mind Candy know this because they regularly get postbags of art from kids and their Moshi blog ‘The Daily Growl’ gets over 10,000 comments everyday. Seeing the success of products like ‘Rainbow Loom Bands’ and monolith success of creative sandpits like ‘Minecraft’ all point to an audience who want to create. They want to get stuck in.

Mind Candy saw a gap in the market, an app for children where their creativity can be shared. PopJam is somewhere between Instagram and Snap Chat. PopJam will be a walled garden where kids can be kids. There will be contests and polls. Every single image currently will be seen by a pair of human eyes before going in to a stream. When questioned on the scalability of this Michael said this was a work in progress they wanted to see what the demand would be. The idea is that eventually users would build up trust and then at that point possibly not every image would be checked.

As well as feeds from friends and direct from Mind Candy, there is the opportunity to subscribe to professional channels and Mind Candy want to invite the Children’s Media community to start a channel for their content. At the moment they have 100 spaces to be filled.

Stuart Dredge then briefly interviewed Michael asking first about the intentions for revenue making from the app. Michael reasserted that it is still early days. Currently there is no commercial model the app will remain free for the time being. They did like the subscription model they had with Moshi and he feels this would potential the best choice for parents as it would be more transparent and good for them as they’d have more balanced continuous income from the product.

Stuart asked about the intended age of the audience, what would happen if loads of grown ups come along?

Michael said he thinks its a wonderful product that the whole family can enjoy. That adults and kids interact in public all the time, why not in digital spaces? The key is down to the security.

Michael hopes that they will find the right balance between fun and safety. He added that both Nintendo and Pixar make great content for the family and thats what they’re aiming for.

After the end of the conference sitting in the bar with friends I couldn’t help myself but download the app and have a go. I really like it, I have to admit when I first heard about it I was underwhelmed but having played with it I really think they’ve nailed it. Some details will iron out as users use it – but if they’re monitoring usage as much as Michael said they are, and they’re able to adapt and change it iteratively, I think it’s a really smart move. I’ve been dying to test the moderation but something is stopping me, I’m not sure it’s fear of getting kicked off, or that actually my badly scrawled very best level 5 swear would get through and actually be seen by a child.

The session was ended with thank you’s and praise for all involved. I’d quite like to add my own thanks here. I’ve been coming to this conference for 5 years and actually I think this was the best one. Well done everybody!

For the speaker profiles – look at the session description.