I was fortunate enough to cover this 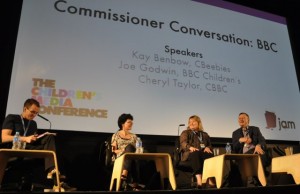 session with the BBC Commissioners for the second year running, and went in with high expectations.  I wasn’t disappointed, as my expectations were met and many golden nuggets were dispensed by a terrific panel. By taking us through some recent commissions, and offering valuable advice for anybody looking to send a show their way, delegates were given real value for money (and a few laughs too).

The session was also well-handled, with the panel continually taking it in turns to offer their thoughts, which kept everything fluid. Kay Benbow (CBeebies) initially discussed the highly-anticipated re-boot of the ‘Teletubbies’ while Cheryl Taylor (CBBC) offered some insights into ‘Dangermouse’ (he’s going to have an iPatch!).

Both prompted questions about the decision to re-boot old shows over developing new ideas, but, as Kay put it, a great show is a great show and it will continue to serve young audiences. Cheryl added that the show’s stories will also be original, but the tropes will remain the same, which sparked an amusing quarrel between Joe Godwin (Director of BBC Children’s) and Cheryl as he questioned the meaning of the word ‘trope’. As the two of them bickered, they found themselves picking up a similar argument they had last year!

As we got back on topic, we began an interactive portion of the session, in which delegates were able to shout out names of shows they would like to see re-booted on either CBBC or CBeebies. Amongst them were ‘Worzel Gummidge’, ‘The Singing Ringing Tree’ and there was also one woman who was quite desperate for BBC to jump on the Fairly Tale trend of many recent blockbusters!

As we moved onto future commissions, and what delegates can do (and not do!) to see their shows and pitches stand a better chance, the commissioners offered lots of advice based upon years of experience. I have summarised these above in the takeaways, but feel it’s also worthwhile hearing some of the challenges that commissioners face, that they must take into consideration when making decisions. These include current and continuing financial restrictions, and understanding how to measure the ratings of the various touch-points that aren’t television, such as iPlayer. Still, there are plenty of reasons to be cheerful, and plenty of top tips to sink your teeth into above!

‘Even when you think you already know the channel and its needs, it’s still worth going – you pick up one nugget, and it could be the start of a gold rush!’ – Louise Lynch, Libra.