Whatever Happened To The Heroes? – Report

Even though they are quite short and their white armour creaks, stormtroopers are still scary.  Oh, and there will always be heroes, some more super than others. 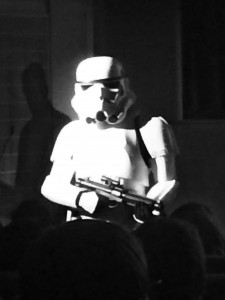 Moderator Jeremy Dickson from Kidscreen introduced the session saying that superheroes are huge for adults and kids in films and comics but on television there has been a shift from action adventure to comedy for the 6 – 9 yr boys demographic. Can superheroes ever be super again?

Research consultant Nicky Goldstone reminded the room that boys are not an homogenous group; different ages have different needs and even within a same age, there are of course different types of people. Generally though, younger boys 5-7 yrs like ‘fighting cartoons’ and happily play with action figures. If however a 8-9 year old is still enjoying action figures, he knows he’s not one of the cool kids and will keep his play private. Older boys grow out of animated action adventure – they want something more ‘realistic’. They still watch animation but for laughter and giggles, to explore emotions and fears and to ‘reflect their psyche’. Heroes still resonate for older boys though – they are powerless in an adult world. But they are perhaps nowadays more likely to want their ‘fighting fix’ from iphones and tablets, where they are more in control and it seems more realistic.

Patricia Hidalgo from Cartoon Network said that they still have heroes but they come in different shapes and sizes. ‘Ben 10’ is still alive and kicking but the demographic that enjoys him is younger than the original audience. To broaden the channel’s reach, Cartoon Network has brought in more comedy shows like ‘Adventure Time’. However, within those shows, heroes are still important: “they are part of our DNA”.

David Levine from Disney acknowledged that having acquired the Marvel and Star Wars brands, action adventure is a big deal for Disney. The grown ups in the audience all became ten again as two stormtroopers marched into the room to stand guard as David unveiled their new show ‘Star Wars: Rebels’. Confirming Patricia’s observations, David said that this strand of Star Wars has more humour than ever before as well as strong female characters.

Referring back to the session’s title, Ken Faier of Nerd Corps said that not much has happened to the heroes. Action Adventure was rarely hugely successful – it is a small niche genre. People think it is bigger than it is because of the occasional massive hits. For a small indie to compete with the big broadcasters, they have to have strong characters and concept that can deliver heart, humour and collectibility. A boy will watch a comedy ten times but an action adventure only three or four times.

Finn Arnesen of Hasbro Studios agreed that action adventure has never gone away. What has changed is the demographic. Bringing ‘Transformers’ back to TV on the back of the movies has raised a number of issues. It is a heritage brand with an older cult following that they don’t want to annoy but there is a clear need to go through all the touch points for a new audience – more comedy, more human interactions on top of all the shooting. That has proved challenging because you can’t take the mickey out of Optimus Prime! In the movie, it’s very serious; they’re saving the world but on TV the stakes can’t be so high. It has been difficult to get the mix right.

This move to more humour is seen though across action adventure – Marvel comics for example and the ‘Lego Movie’ which didn’t take its hero at all seriously. Instead it gave the audience very clever comedy.

Another new development is a shift away from the token girl in the team to genuine heroes for girls. Disney for example have two new shows for 2015, ‘Ladybug’ and ‘Star Versus the Forces of Evil’, both of which have girls who kick butt. There was some speculation about which toy aisle these action figures will find their way into.  Play patterns do not always align with broadcaster needs. So for example ‘Powerpuff Girls’, which is also returning, appeals to boys on TV but the consumer products are likely to be fashion items for girls.

The session then ran out of time but among the questions and answers, there were some interesting soundbites: