Transmedia: Where do I start? – Report 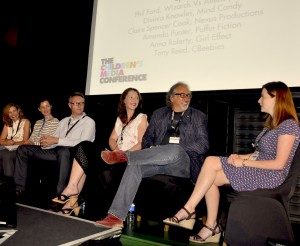 We’ve heard the word, transmedia, being banded about for several years now, but what is it? Judging from the panel at Friday’s session on the subject, it can mean different things to different people.

Exactly what transmedia is was the first question that screenwriter and chairperson, Richard Dinnick asked the room. A majority of the audience were certain that they knew… but what about the panel?

Tony Reed, Executive Producer of CBeebies In-House Production said that transmedia was about looking across different platforms, while Claire Spenser Cook, Development Producer at Nexus, accepted that not every idea and character would see every platform.

Anne Rafferty, Consultant at The Girl Effect suggested caution. A website, for instance, might not be considered transmedia if it was simply a marketing tool.

Amanda Punter, Publishing Director of Puffin Fiction said that transmedia is costly and time-heavy, that it’s best to work with others to create a transmedia experience. Kids want constant engagement.

Claire Spencer Cook, Development Producer at Nexus believed that not every platform was suitable for every character.

Mind Candy COO, Divinia Knowles, explained that Moshi Monsters would always be bigger than just the digital side, describing it as ‘Toy-etic.’

‘Toy-etic, that’s a new word for me,’ said wordsmith, Phil Ford, executive producer and co-creator of ‘Wizards vs Aliens’ as well as writer for Doctor Who and Captain Scarlet. The panel then considered if merchandising was part of transmedia – Phil stating that the great thing about toys is that children can make up their own stories with them.

Tony Reed said that multi platform content is part of the (BBC) remit for pre schoolers. CBeebies is aware that they have to take care: parents want to control access to content and there are often complaints about the encouragement the content can give children to over use smart phones and tablets.

Phil Ford regards the games available through the official ‘Doctor Who’ website as proper Doctor Who. They are free to download, paid for by the licence fee, have the same level of quality as the television version and form part of the series: they are cannon. He backed tracked for a moment, admitting that they could not refer to the games in the TV show itself as some of the audience would not be able to access them, but described them as, ’totally transmedia.’

Claire Spencer Cook explained that Nexus had a film project, which was still in development. In the meantime, they had used the concept to develop an app. ‘It’s a way of creating our own IP.’

Phil Ford: ‘When we all start wearing Google glasses we’ll walk into a building and find stories there.’

Amanda Rafferty: ‘There will be increased interactivity.’

Divinia Knowles: ‘We follow the audience, wherever it may be in the future.’