A very popular session at this year’s CMC When Technology Meets Storytelling is also available as a podcast – see the foot of the page. 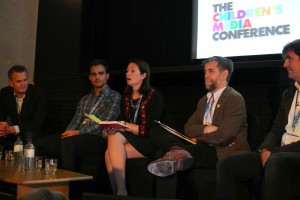 In the late afternoon of a busy day, Cinema 2 was at capacity for this session, which focused on whether or not we can make better stories using new technology – or whether it will just be different.

Some people were turned away due to the popularity of the session, so I’ll try to make this blog especially good so you don’t miss anything important!

The relaxed but informative session took the form of each member of the panel taking us through some of their work in a detailed but concise fashion, each project or invention being an example of the influence of technology on storytelling. 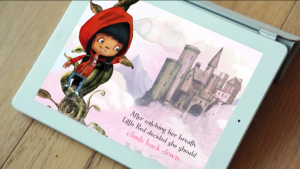 James Huggins (Made In Me) went first, showcasing ‘Tale Spin’, an iPad book with choose your own adventure elements. The story involves a vibrant mix of different fairytale characters (the clip we saw involved Little Red Riding Hood climbing up the beanstalk!)

Next up was Jim Le Fevre (Nexus Productions), who introduced us to the visually arresting ‘Stages’, which, inspired by the more elaborate of theatre sets, is a physically built set (with elements therein controlled by levers and doors etc), but with digital projections which you can control via your phone.

Michael O’Neill (Adobe) focused first on technology, showing how trackers inserted onto an animated character can help to achieve the lip-syncing effect, and generate puppetry and three-dimensional movement. He then moved on to a Final Draft-like scriptwriting tool Adobe is developing, where every stage is considered in the writing process, from pitch, summary and character bios, to budgets, locations and the actual scriptwriting tools themselves.

Last but not least, Guy Wilcox (Crane Media) introduced us to ‘Tree Fu Tom’, which, played on an iPad, allows the user to control a 3D character which is layered over your ‘real world’, a replication of your home, family, toys etc, within the iPad.

With all these projects attempting to use technology to enhance story, the panel (and the delegates) discussed whether technology can truly make better stories? The verdict reached was ultimately a flat ‘no’, but that didn’t dampen a lively debate in which the benefits of this technology were keenly acknowledged, the takeaways from which are summarised at the start of this post.

“For me, this session very refreshing. To see people working with technology but still focusing on children being encouraged to play together and outside. There is a concern children can be interactively connected but physically insular.” – Becks Dorrance – Director, Scribbled Cloud.

“It was wonderful to see such great innovation together with such traditional values, from all the speakers.” – Hannie Kirkham.